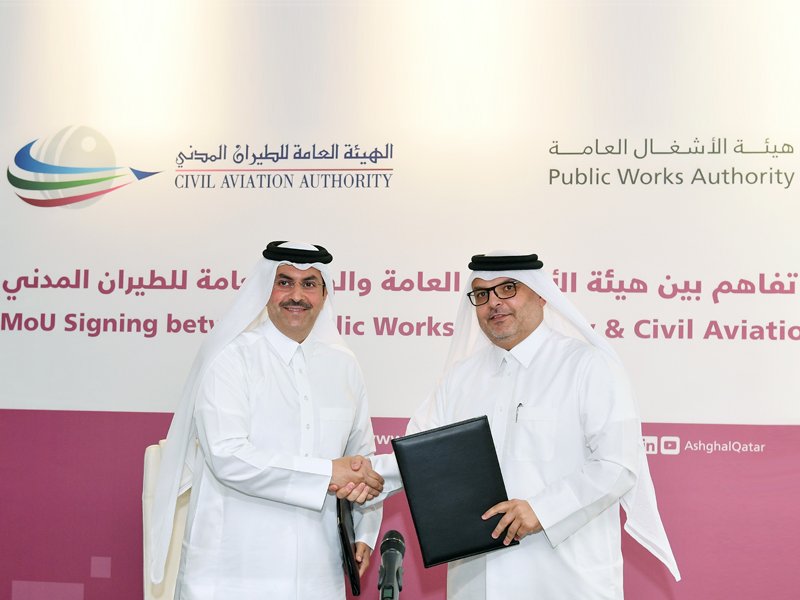 The Public Works Authority ‘Ashghal’ and the Civil Aviation Authority has signed a Memorandum of Understanding (MoU) on Wednesday 12 September 2018 to enhance cooperation and benefiting from the capabilities of both parties in order to expand the CAA’s weather and climate monitoring network. Whereby to  enable it through Ashghal to install the monitoring system on more roads, as part of the early warning project initiated by the State of Qatar in allocated sites.

The MoU enables Ashghal to access any data that is monitored within the geographical borders of the country, and gives it a direct access to the official website of CAA to view and benefit from all its images, satellite images, radar and earthquakes, in addition to a network of meteorological stations and other information available.

The two authorities also aim to develop staff and raise their competence through training courses and workshops.

In his speech, Dr. Eng. Saad bin Ahmad Al Muhannadi, President of the Public Works Authority said that Ashghal is keen to strengthen cooperation and partnership with all state institutions to implement the various government programmes. He expressed his pleasure to sign a memorandum of understanding with the Civil Aviation Authority to enhance the cooperation of the two parties in exchanging scientific and technical information, and the training and development of individuals.

He said ‘ The signing of the MoU will benefit both parties, especially with Ashghal’s ability to see weather forecasts that contribute to Ashghal’s readiness to deal with any weather conditions that may occur in the country and to implement appropriate plans to maintain the road and drainage networks in the country ‘.

Abdulla Nasser Turki Al-Subaey, Chairman of the Civil Aviation Authority emphasized the role assigned to CAA under this agreement in installing and managing the network of meteorological stations and meteorological observatory stations distributed in different regions of Doha. The mentioned network contributes to an early warning project initiated by the State, which enhances the level of preparedness for any emergency and thus contributes to the protection of lives and property, and increases the level of well-being for the citizens in line with Qatar’s Nation Vision 2030.