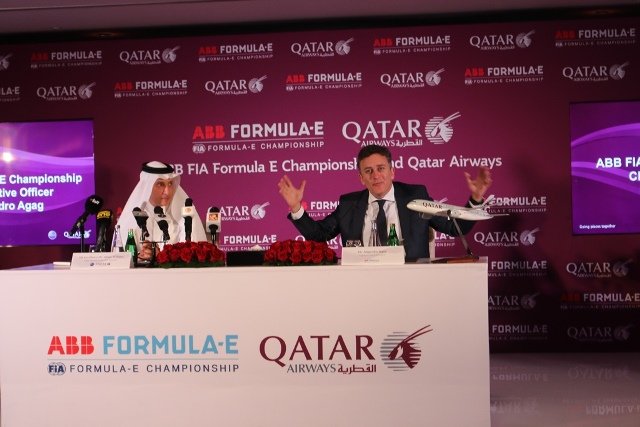 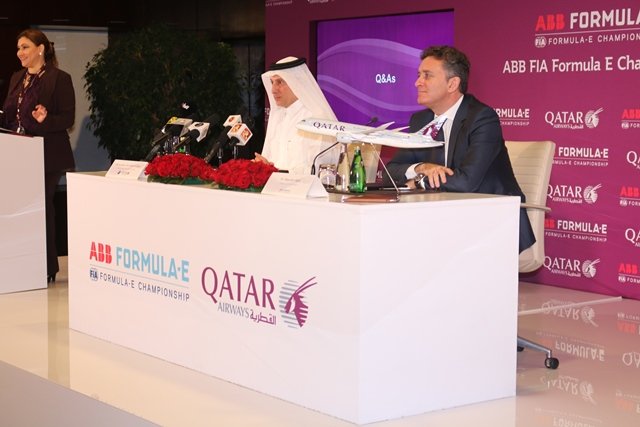 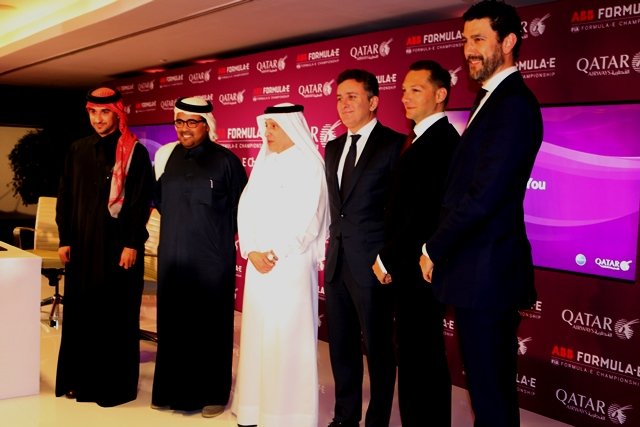 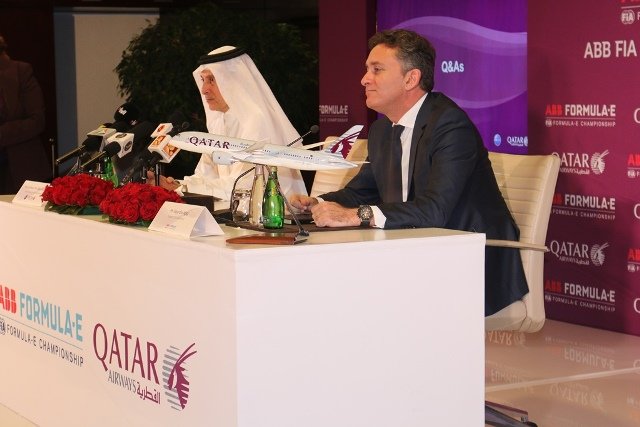 Qatar Airways announced this morning that it has enhanced its highly-successful sponsorship of the ABB FIA Formula E Championship electric street racing series. The new three-season deal, announced at a press conference in Doha was attended by Akbar Al Baker, Group Chief Executive, Qatar Airways and Alejandro Agag, Founder and CEO of Formula-E.

Addressing to media, AlBaker said that ‘As an airline which is always ahead of the curve and driven to innovate, it makes perfect sense for us to expand our partnership for flagship events this season as the Official Airline Partner of the future of motor racing, through Formula E. With its ability to deliver thrilling racing events using the very latest environmentally-friendly technology, Formula E has demonstrated that this incredible sport is continuing to set the pace and win more new fans wherever their races take place. We are delighted to continue our support, and as an airline are committed to bringing people together through sport around the world.”

The enhanced partnership also means Qatar Airways will become the Official Airline Partner for the Rome E-Prix on April 14, and the Berlin E-Prix, on 19 May this year.

The enhancement of the airline’s Formula E partnership comes after the tremendously successful 2017 Qatar Airways Paris E-Prix, which took place in the French capital last May, and the first-ever New York City E-Prix in July 2017, where Qatar Airways was the Official Airline Partner.

Alejandro Agag, Founder and CEO of Formula-E,said, ‘ After another enthralling season last year, we are delighted that Qatar Airways has reaffirmed its commitment to Formula E by extending its partnership and becoming race title partner of not only the Paris E-Prix, but for this season, the New York City E-Prix as well. Our shared passion to strive for excellence and innovation will once again see the series make history in the some of the world’s most recognisable cities – thanks to the support of Qatar Airways in helping us go places together.”

Qatar Airways believes in the power of sport to bring people together, and sponsors many top-level sports around the world. As well as sponsoring Formula E, Qatar Airways is also the Official Airline Partner of FIFA, which includes 2018 FIFA World Cup Russia™, the FIFA Club World Cup, the FIFA Women’s World Cup and the 2022 FIFA World Cup Qatar.

As an airline renowned for its dedication to innovation, Qatar Airways proudly flies one of the youngest fleets in the skies, featuring the world’s most technologically-advanced aircraft. Qatar Airways operates more than 200 modern aircraft to a network of more than 150 key business and leisure destinations across Europe, the Middle East, Africa, Asia Pacific, North America and South America. The airline is continuing its ambitious expansion plans, and will launch a host of exciting new destinations in 2018, including Penang, Malaysia; Canberra, Australia; and Cardiff, U.K., to name just a few.

As well as being voted Skytrax ‘Airline of the Year’ in 2017 by travellers from around the world, Qatar’s national flag carrier also won a raft of other major awards at last year’s ceremony, including ‘Best Airline in the Middle East,’ ‘World’s Best Business Class’ and ‘World’s Best First Class Airline Lounge.