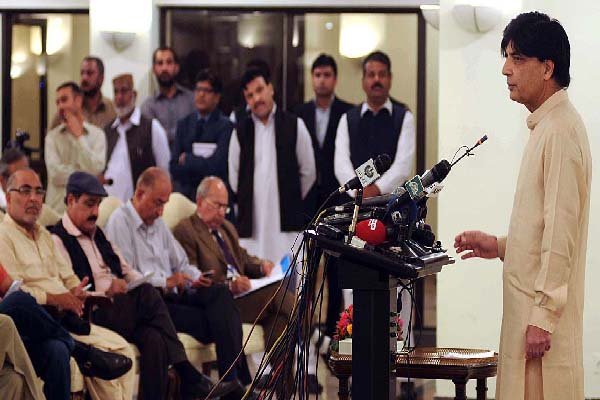 ‘ There were no winners or losers today rather Pakistan won as Pakistan Tehreek-e-Insaf (PTI) chief Imran Khan withdrew his call to lockdown Islamabad, Chaudhry Nisar Ali Khan, Minister for Interior and Narcotics Control announced today. He said today Pakistan had won. It was a victory for the future of children, and for national institutions. Peace, democracy, rule of law and reliance on institutions was a victory for the country, Pakistani Interior Minister said while addressing a press conference here.

“Pakistan and its future generation emerged victorious after leaving behind a tense political atmosphere of the last few days,” he said, adding that now it should be accepted “we have to show confidence in our institutions.”

He said as interior minister and a Pakistan Muslim League-Nawaz (PML-N) worker, for him the change in political situation was not a win or loss for anybody. “Nobody should take it as a win or loss.”

The minister appreciated and welcomed what Imran Khan had said, referring to his decision to shelve his plans for a `lockdown’ of Islamabad. Chaudhry Nisar said political hostility was against the people’s interests.

He thanked the people of Pakistan, especially the citizens of Rawalpindi and Islamabad, who faced difficulties due to political tension. Minister said there were areas in Punjab and Khyber Pakhtunkhwa (KPK) where people faced problems and he felt sorry for that. The reason for their difficulties was not the government, he added.

Nisar said at that time, Imran Khan had given a solemn commitment but he broke his promise and the government did not take any administrative action. “This time too we tried to resolve the issue peacefully,” he added.

He said Pakhtuns were not only represented by the PTI but many times they had also given mandate to the PML-N, Jamiat Ulema-i-Islam, Awami National Party and to its first elected chief minister Mufti Mehmood.

Chaudhry Nisar Ali Khan said Pakhtuns were hospitable people. “Even if your enemy says that he wants to come to your home, you open your doors for hospitality, but if someone says that he wants to occupy your house then what will be your reaction?” he asked referring to the PTI supporters, who attempted to march on Islamabad.

“When you held public meetings in the past, we did not stop you,” he remarked. He asked the people of Khyber Pakhtunkhwa about their reaction if someone from Punjab said that he would come and close down Peshawar if the KP chief minister did not resign.

He said KP Chief Minister Pervaiz Khattak was setting a wrong precedent as an armed group tried to impose its will on others. “I am aware of the `mehman nawazi’ (hospitality) of the Pakhtun people. And we did not stop you when you protested in F-9 Park,” the minister recalled. He said a wrong impression was also given that it was injustice to Pakhtuns. “You adopted an incorrect policy. We used law enforcement agencies to uphold the constitution and law.”

Nisar said no one could think that a provincial government high-ups would try to enter other province with official cranes, lifters and masks. Welcoming the PTI chief’s reaction over the Supreme Court’s proceedings, the minister said he acknowledged the positive role of Islamabad High Court and Lahore High Court for ensuring rule of law and supremacy of the constitution.

He said the Prime Minister had requested the Supreme Court four months back to formulate its own terms of reference for investigations into the Panama Papers. To a question, Nisar said three intelligence agencies and three other members chosen with consensus would investigate the matter of Dawn’s story in a transparent manner.

Answering another question, he said the Frontier Constabulary (FC) was playing a vital role for the country’s defence, and maintaining law and order situation. He said the FC personnel would be given 50 per cent raise in their salaries from next month and another 50 per cent increase from June next to bring their pays at par with those of the Islamabad Police.

The retirement age of FC personnel was also being enhanced to 45 years, he added. Similarly, he said, the pay scales of Islamabad Police were also being upgraded from 5 to 7 for constables, from 7 to 9 for head constables and from 9 to 11 for assistant sub-inspectors. It would cost Rs 540 million and the Prime Minister had given his approval in that regard.

The Interior Minister said time had come to express confidence
in police, intelligence agencies and national institutions. Justice
Shaukat Siddiqui of IHC had given many judgments against the government in the past, but they always expressed confidence in him, he added.

“In the length and breadth of the country, the courts and the government have the responsibility to uphold fundamental rights,” he said. But it was unfortunate that decisions of Islamabad High Court (IHC) was mistrusted by the PTI, he added.

Chaudhry Nisar appreciated the statement of Jamaat-i-Islami chief Sirajul Haq that the political tension was not a matter between Punjabis and Pakhtuns.

A good and experienced politician always kept the people united, he added. He said traders, parents, school children and other segments of society were concerned about the lock down of the capital. He said the outside world including friends like China and Turkey were worried about the current political situation in Pakistan but by the grace of Allah Almighty the situation had become normal.