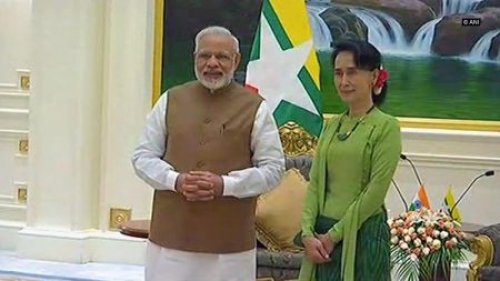 On a day Prime Minister Narendra Modi began his official visit to Myanmar, human rights organisation Amnesty International urged him to push the country’s leadership to provide assistance to Rohingyas in the violence-hit Rakhine state. The rights body also said the Modi government should “reaffirm” its commitment to protect Rohingya refugees and asylum-seekers in India instead of “threatening” them with deportation.

“Prime Minister Modi must also use his visit to push the Myanmar authorities to allow full and unfettered humanitarian assistance to people in need. Nothing can justify denying life-saving aid to desperate people,” Aakar Patel, Executive Director at Amnesty International India, said.

The Amnesty’s plea came on a day Union Minister Kiren Rijiju asserted that Rohingyas who have crossed over to India are illegal immigrants and stand to be deported.

He also said that nobody should preach India on the issue as the country has absorbed the maximum number of refugees in the world. Around 40,000 Rohingyas are said to be staying illegally in India.

Modi reached Nay Pyi Taw today on a three-day visit and called on Myanmar President Htin Kyaw. The prime minister’s visit to Myanmar comes amid a spike in ethnic violence with Rohingya Muslims in the Rakhine state.

The number of Rohingya refugees that have fled to Bangladesh to escape violence in Myanmar, which flared up late last month, has touched 1,23,000, according to the UN refugee agency.

The Amnesty observed that despite being home to thousands of refugees, India is not a state party to the 1951 Refugee Convention or the 1967 Protocol Relating to the Status of Refugees, and does not have a domestic legal refugee protection framework.

“The treatment of refugees falls largely under the Foreigners Act of 1946, which makes no distinction between asylum-seekers, refugees and other foreigners. The Act makes undocumented physical presence in the country a crime,” it added.