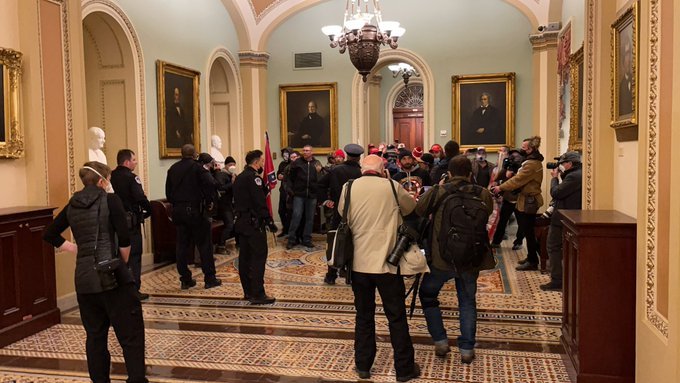 Pro-Donald Trump protesters, upset at the outcome of the presidential election, stormed the US Capitol on Wednesday as Congress met to tally the electoral votes that certify Joe Biden’s election as president.

Protesters overwhelmed US Capitol Police outside as numerous others breached security and entered the Capitol building, creating a scene of chaos and causing members of Congress to flee the House and Senate chambers to be safely locked down in their offices while some were evacuated elsewhere.

At about 2pm (19:00 GMT), while senators were debating an objection to Arizona’s electoral votes raised by Republican Trump supporters, debate was halted when word came that protesters were in the hall outside the Senate chamber.

As overwhelmed law enforcement tried to deal with the protesters, the mayor of Washington, DC, Muriel Bowser, implemented a city-wide curfew for 21:00 GMT.

President Donald Trump and President-elect Joe Biden released dueling messages about the violent protesters that descended on the US Capitol Wednesday.

Biden, who spoke first, live from Wilmington, Delaware, strongly denounced the rioters calling their actions an “unprecedented assault unlike anything we have seen in modern times”.

Trump, in a recorded video released on Twitter, empathized with his supporters saying, “I know your pain, I know you’re hurt,” before pivoting back to the unfounded election claims that are at the root of Wednesday’s chaos.

“We had an election that was stolen from us.”