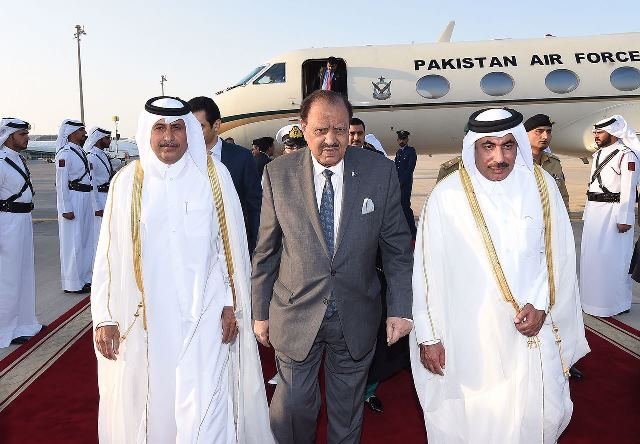 The President, who is visiting Doha at the invitation of the Emir of Qatar Sheikh Tamim bin Hamad bin Khalifa Al Thani, was warmly received at the Hamad International Airport by Minister of Transport and Communication Jassim Saif Ahmed Al Sulaiti.

Ambassador of Pakistan in Qatar Shehzad Ahmad and senior officials of the embassy were also present. Clad in traditional dresses, two children presented a bouquet to the President, who was accompanied by First Lady Begum Mehmooda Mamnoon Hussain.

During the visit, the President will hold bilateral meetings with the Emir of Qatar and other dignitaries. The two sides will review important aspects of bilateral relations. Regional issues and international developments will also be discussed.

Pakistan and Qatar enjoy excellent bilateral relations in all fields. The two countries share identical views on regional and global issues and also closely cooperate and support each other at the international fora like the UN and OIC.

People to people contacts have remained an important feature of bilateral relations between the two countries. Qatar hosts more than 125,000 Pakistanis, who have been contributing towards the development and prosperity of Qatar as well as Pakistan.

The high level exchanges between the two countries, that started with the visit of the Emir of Qatar to Pakistan in March 2015 and return visit by the Prime Minister of Pakistan to Qatar in February 2016, are a testimony of growing relations between the two brotherly countries.

According to Pakistani officials, the main focus of the President’s official talks and interaction with the Qatari leadership will be on further enhancement of bilateral relations in various fields, including energy cooperation, trade investment, defence and increase in employment opportunities for the Pakistani workforce in the Qatari market.