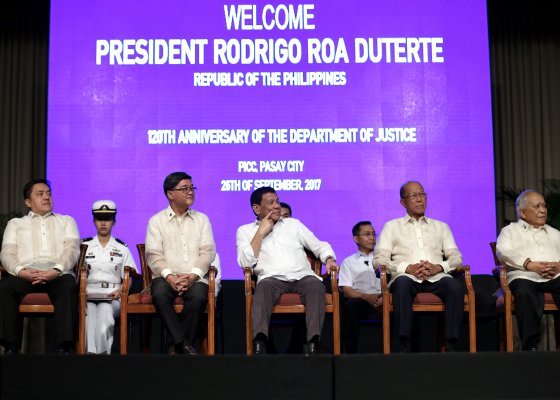 President Rodrigo Duterte has warned that the United States will become “a sorry state” if it does not cooperate with the Philippines on the “serious matter” of illegal drugs.

Speaking at the 56th anniversary of the Philippine Constitution Association (PHILCONSA) held at the Manila Hotel on September 26, 2017, President Duterte said the Philippines has become a transshipment point for methamphetamine hydrochloride (locally called shabu).

He said the drugs come from a regionally-based syndicate and are made to pass through the Philippines on their way to other countries, including the US.

“The Philippines today is a client state of the Bamboo Triad. They have taken over the operations… (The) Philippines is a transshipment of shabu to America, and it behooves upon America to work closely with the Republic of the Philippines, especially on this serious matter,” he said.

President Duterte said the shabu is cooked in trawlers while at sea and are thrown overboard to be retrieved by drug dealers, using GPS technology to track them.

He said the US government must cooperate with the Philippines in order to put a stop to the illegal drug trade in both countries.

“One of these days, America would be a sorry state (if it does not cooperate),” he said.

The issue of illegal drugs is important to Filipinos who see it as a major stumbling block to development. A recent survey by the Pew Research Center has shown broad support among Filipinos for President Duterte’s war on drugs.

The survey showed that around 78 percent of Filipinos approve of Duterte’s handling of the illegal drugs issue, with 62 percent believing the government’s campaign was making progress.