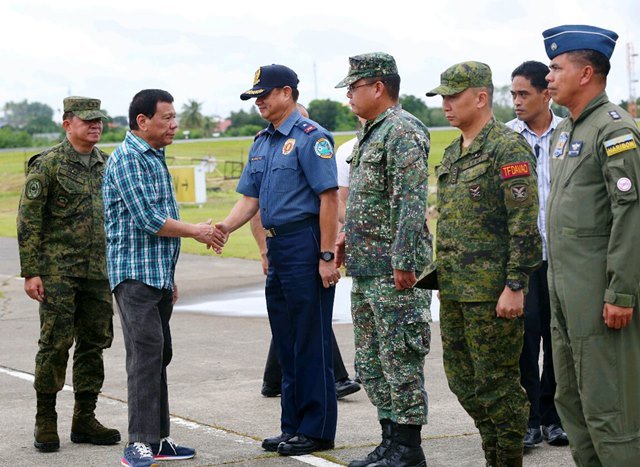 President Rodrigo Duterte on Friday said he takes responsibility for the killings of drug suspects during legitimate operations performed by law enforcers.

Duterte flew to this largest army camp in Northern Mindanao Friday afternoon to pay tribute to the Army soldiers who were killed and wounded in an armed encounter with the communist New People’s Army (NPA) in the hinterlands of Misamis Oriental last Monday.

In an impromptu press conference, Duterte said he takes responsibility for all the killings of drug suspects during legitimate operations carried out by the law enforcers.

“I take responsibility for all those killed during legitimate encounter. I will answer my deeds or misdeeds,” he said.

The President lambasted the human rights advocates for accusing his administration of “illegally” allowing the “extra judicial killings” in the country.

Duterte said that the killing would continue as long as the illegal drug activities continue in the country.

He said that with more than 3 million Filipinos, including top government officials and the police engaged in illegal drug activities, his administration could not simply allow the destruction of the country.

“If the human rights group could stop the illegal drug activities tomorrow, there would be no killings anymore,” Duterte said.

He cited several figures of various public officials who were reportedly engaged in illegal drug activities who were not subject of investigation and validation.

The President also disclosed about the ongoing top-to-bottom revamp in his Cabinet in an effort to rid the government of corrupt public officials.

He said that more heads would roll in the coming days, regardless of positions in the government.

“Even if you are a director, a career executive service officer (CESO) or Civil Service eligible, the cleansing against corruption would spare no one,” Duterte said.

Last month, President Duterte also visited Camp Evangelista to pay tribute to three Army soldiers who were killed in an ambuscade in Bukidnon shortly before the unilateral ceasefire with the communist NPA rebels scuttled.

The Chief Executive willfully allowed picture-taking and selfies with members of the local media before heading back to the Laguindingan airport about 8 p.m. Friday.