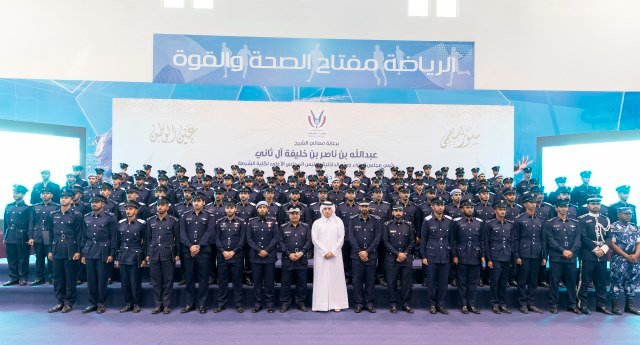 Sheikh Abdullah bin Nasser bin Khalifa Al-Thani, Prime Minister and Minister of Interior of Qatar attended the graduation ceremony of the second mandatory qualifying course for graduates of civil universities at the Police College, held at the College’s headquarters on Wednesday morning. Present on the occasion was Director General of Public Security HE Staff Major General Saad bin Jassim Al Khulaifi. A total of 99 trainees completed the course held during 5 November 2016 to 10 May 2017.

The ceremony included various training presentations and military formations, as well as military parade under the supervision of Chinese infantry instructors. It also included a screening of a documentary about the graduates during the training course.

Prime Minister also honoured the Chinese infantry instructors who participated in the training of a group of officers, non-commissioned officers and instructors at the Police College on the Chinese basic infantry course.

Six months long 2nd mandatory qualifying course was participated by 99 trainees from a number of military entities in the state with various specialties. The training covered various military, sport and police-related academic courses.

Brig. Dr. Muhammad Abdullah al Mohanna Al Marri, Director General of Police College said that the six months course covered legal and security disciplines which will help them in their career in police force for carrying out their duties in regards to protection and security of State.