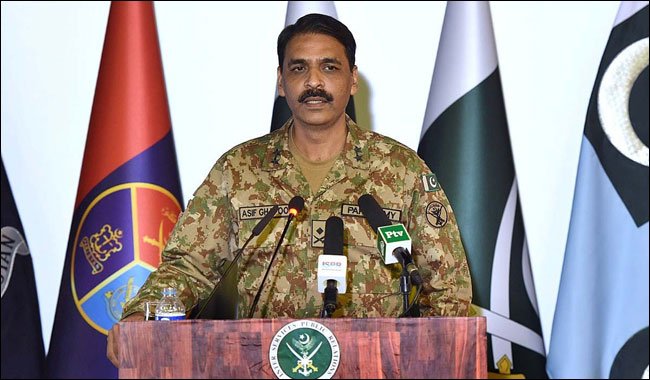 Shortly after Pakistan’s Foreign Office strongly reacted to US Vice President Mike Pence remarks, Pakistan Military Spokesman Major General Asif Ghafoor has said that allies do not put each other on notice and such statements could undermine efforts against war on terror.

In an interview with a private TV, Director General Inter Services Public Relations, said Pakistan security forces has done what others could not do against the terrorists.

He said Pakistan was dragged into Afghan war, adding that terrorists’ sanctuaries in Afghanistan should be wiped out. Pakistan had long been demanding elimination of Tehreek-e-Taliban Pakistan leadership, hiding in Afghanistan, DG ISPR added.

Major General Asif Ghafoor went on to say, “Pakistan is not fighting against terrorists for money. We received money from US under coalition support fund, which Pakistan spent in this war.”

The military spokesman said Pakistan does not need any US aid but mutual trust.

He said Pakistan’s nuclear assets are safe and Washington itself has acknowledged this.

In an apparent warning to Pakistan during his visit to Afghanistan, Pence said; “Pakistan has much to gain from partnering with our efforts in Afghanistan. The days to shelter terrorists have gone. It has much to lose by continuing to harbour terrorists.

“I believe victory is closer than ever before,” US media quoted Pence as saying during his meeting with troops.

Earlier, Foreign Office Spokesman strongly reacted to Pence’s remarks, saying allies do not put each other on notice. On notice should be those factors responsible for exponential increase in drug production, expansion of ungoverned spaces, industrial scale corruption, breakdown of governance, and letting Daesh gain a foothold in Afghanistan.

Also focus should be on creating peace and reconciliation mechanisms, the spokesman said and added that “Finally, externalizing blame should be put on notice.”

Foreign Ministry’s Spokesperson said that Pence’s statement is at variance with the extensive conversations we have had with the US Administration.