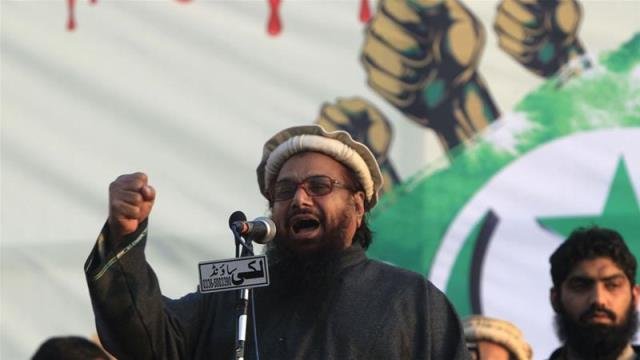 A Pakistani charity designated by the United Nations as a front for armed group Lashkar-e-Tayyaba (LeT) launched a political party on Monday, in a move that could see the anti-India group accused of carrying out the 2008 Mumbai attacks, enter mainstream national politics.

Hafiz Muhammad Saeed, the chief of the Jamaat-ud-Dawa (JuD) organisation that launched the party, has been designated by the UN as a “terrorist”, and the United States has had a $10m bounty on his head since 2012 for his alleged role as the leader of LeT armed group.

Pakistani police have held Saeed under house arrest in the eastern Pakistani city of Lahore since January under local anti-terrorism laws. His detention was extended for a further two months on August 1.

The UN sanctions include the freezing of all assets, a ban on international travel, and an arms embargo.

At the formal launch of the Milli Muslim League (MML) party in the Pakistani capital of Islamabad on Monday, party chief Saifullah Khalid was clear that he held Saeed in high regard, although the question of what role he would play in the party remained an unanswered one.

“What role he will play in the Milli Muslim League or in Pakistan’s ongoing politics will be seen after Allah ensures his release,” said Akhtar, adding that the issue of Saeed’s release was high on the MML’s agenda.

“[Once he is released] we will meet him and ask him what role he would like to play [in the party]. He is the leader of Pakistan.”

Saeed has repeatedly denied any role in planning the coordinated attacks on the Indian city of Mumbai in 2008, which killed more than 160 people.

He also said that his JuD charity is distinct from LeT and has no connection with it.

The US, as well as several international governments and security analysts, however, disagree with that assertion, listing JuD as one of a number of charitable front organisations for LeT, with Saeed listed as the group’s leader.

The UN listed LeT on an international sanctions list in 2005 for “participating in the financing, planning, facilitating, preparing or perpetrating of acts or activities by, in conjunction with, under the name of, on behalf or in support of […] supplying, selling or transferring arms and related material to […] or otherwise supporting acts or activities of” al-Qaeda, Osama bin Laden and the Afghan Taliban.

The Pakistani government lists JuD as “under observation” on a list of banned “terrorist organisations”, rather than banning the group outright.

In 2015, Pakistan’s media regulator banned all coverage of the group’s humanitarian activities by the country’s news media.

LeT has been listed as a “terrorist organisation” by Pakistan since 2002.

The MML party has submitted registration documents to Pakistan’s Election Commission, said Akhtar, but it was unclear if the party’s links to JuD would prevent its official registration, which is required to put up candidates for elections.

Khalid said that the MML will work in close conjunction with JuD, which has a network of thousands of volunteers across Pakistan who work mainly in the education and disaster and medical relief sectors.

“We will maintain coordination with Jamaat-ud-Dawa and all other like-minded  organisations that hold the ideology of Pakistan … we will offer them our cooperation, and accept theirs.”

Monday’s developments are likely to draw a sharp reaction from India, Pakistan’s neighbour to the east with whom it has fought three wars.

Indiaa has sharply criticised what it terms Pakistan’s “tolerance” of LeT and apparent unwillingness to prosecute those it deems responsible for the attack in Mumbai and numerous other attacks on the Indian military in the disputed region of Kashmir.

Khalid has long been a member of the JuD’s central leadership.

In June, he led funeral prayers in absentia for those killed by Indian security forces in Kashmir, Indian media reported.

Ayesha Siddiqa, a security analyst, told the Reuters news agency that the new party was designed to cloak the group amid heightening pressure from the international community on Pakistan to crack down on LeT and JuD.

“The making of a party indicates the need of JuD to hide itself further so to avoid criticism,” Siddiqa told the news agency.

While Saeed was unable to attend the MML’s launch event in Islamabad owing to his arrest, Yahya Mujahid, a close aide and also subject to UN terrorism sanctions, was present at the news conference.

He confirmed to Al Jazeera that Saeed was challenging his detention in Pakistani courts.

“He is in high spirits,” said Mujahid