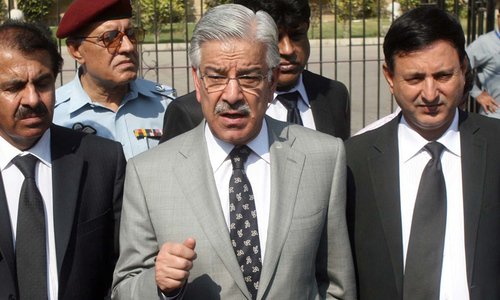 A three-member special bench of the Islamabad High Court (IHC) on Thursday disqualified Khawaja Asif as a member of the parliament under Article 62(1)(f) of the Constitution for not disclosing his employment in a UAE company as an occupation as well as the monthly salary he was receiving.

Addressing the argument by Asif’s legal team that “since copies of the passport attached with the nomination paper also contained a copy of the ‘iqama‘, therefore there was no misrepresentation or concealment”, the judgement days: “Iqama is merely a residence visa issued by the immigration officials. In the instant case, the non-disclosure was that of the employment as an occupation and the salary per month received there under.”

The judgement also makes a reference to the Panama Papers case, saying: “Supreme Court has not disqualified the former prime minister [Nawaz Sharif] merely for holding an ‘Iqama’ but rather his disqualification was due to non-disclosure of assets; holding an ‘Iqama’ cannot be made the basis for attracting Article 62(1)(f).”

“We declare that the Respondent [Khawaja Asif] was not qualified to contest the General Election of 2013 from NA-110 as he did not fulfill the conditions described under Article 62(1)(f) of the Constitution, read with section 99(1)(f) of the Representation of Peoples Act 1976.’ reads the judgment.

The ECP later in the evening issued a notification denotifying Asif as a member of the National Assembly.

The foreign minister, while talking to Geo’s Hamid Mir, said that he will challenge the verdict in the Supreme Court. “I never concealed my iqama,” he told the anchor.

It is not clear if Asif would have to step down from his post as foreign minister following the denotification from ECP.

Article 62(1)(f), which sets the precondition for a member of parliament to be “sadiq and ameen” (honest and righteous), is the same provision under which former prime minister Nawaz Sharif was disqualified by a five-judge SC bench on July 28, 2017, in the Panama Papers case. Likewise, Pakistan Tehreek-i-Insaf (PTI) leader Jahangir Tareen was disqualified on Dec 15 last year by a separate bench of the apex court under the same provision.

‘Judgement written with a heavy heart’

The judgement observed that it would have been appropriate if the political party to which the petitioner belongs, the PTI, had raised the issue at hand in the parliament before invoking the jurisdiction of the court.

“It is obvious from the facts and circumstances in the instant case that Asif had deliberately and willfully not disclosed his status as an employee of the Company , nor receiving of the salary per month pursuant thereto, despite having been expressly put to challenge by the other contesting candidates,” said the judgement.

“The validity of ‘Iqama’, working as an employee of the Company and receiving a substantial salary without being physically present, which is AED 50,000/- per month under the Third Contract executed in July 2017, were some benefits gained from non disclosure. Disclosure would have led to giving up the ‘Iqama’ and the hefty salary paid by the Company for some advice sought telephonically by a foreign based employer from the prospective Defense and then Foreign Minister of Pakistan.”

“The lack of honesty was established by not disclosing the employment as an occupation and the salary received per month despite the vague and obscure amount declared as foreign remittances having been specifically challenged. This would also apply to the non disclosure of the account maintained with the Bank of Abu Dhabi.”

While concluding the judgement, the bench observed that “it is not a pleasant duty for any court to be called upon to examine and exercise powers of judicial review which may lead to an elected representative being disqualified as Member of the Majlis-e-Shoora (Parliament)”.

“We have handed down this judgment with a heavy heart not only because a seasoned and accomplished political figure stands disqualified but more so because the dreams and aspirations of 342,125 registered voters have suffered a setback.”

The PML-N is reportedly looking for ‘potential’ alternative to Asif while local party leadership is having the view that no one from the sitting MNAs and MPAs could take his place in Sialkot’s politics and fill the gap being left by him.

According to reports, there is nobody in the Asif family, including his wife and son, interested in politics.

The local leaders of the PMLN say that central and provincial leadership of the party is considering the name of export and business tycoon Riazuddin Sheikh as replacement of Asif. Mr Sheikh is stated be most influential person from the party leaders in Sialkot and popular among social and business circles.

Maryam Nawaz on Thursday criticised the court’s decision against Khawaja Asif, saying that the PML-N lawmaker has been disqualified in a “fixed match”.