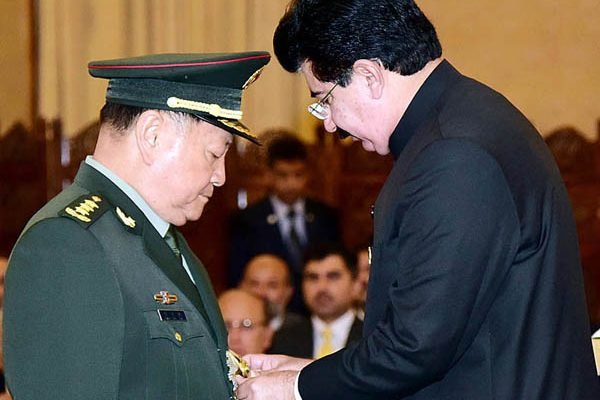 After the ceremony, General Zhang Youxia also called on the acting president. Sadiq Sanjrani congratulated General Zhang Youxia on the conferment of Nishan-i-Imtiaz (Military) and said Pakistan and China were close friends, neighbors and trusted partners because their relations were based on mutual respect and trust.

He emphasized that Pak-China friendship was the cornerstone of Pakistan’s foreign policy and our defence relations were the guarantee of peace and stability in the region.

He said Pakistan deeply valued China’s support on the issues of national and regional security including Kashmir.

On this occasion, Vice Chairman of Chinese Central Military Commission General Zhang Youxia thanked the acting president, government and people of Pakistan and said Pakistan and China enjoyed a time-tested friendship which would further grow in the coming generations.