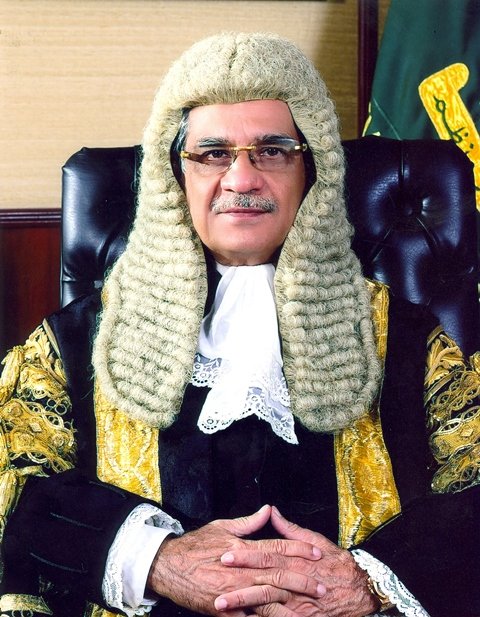 The Chief Justice of Pakistan (CJP) Mian Saqib Nisar on Thursday took a suo moto notice of “contemptuous speeches” against judiciary made by  PML-N leader and State Minister of Interior Talal Chaudhry.

The court will hear the matter against the state minister for interior affairs on February 6, when Cahudhry has also been asked to appear.

In a speech in PML-N’s rally in Jarranwala last week, Chaudhry had said; “Mian sahab, there was an era when the Kaabah was full of idols. Today, the judiciary, which is the country’s highest institution, is also full of PCO [Provisional Constitution Order] idols.”

“Mian Nawaz Sharif, throw them out, throw him out of the court. They will not give justice but will continue their injustices.”

He said that despite the PML-N President Sharif doing so much for the country, “they say that somebody else should become the prime minister.”

Earlier in the day, a three-member bench of the Supreme Court sentenced Senator Nehal Hashmi to one-month imprisonment, barred him from holding public office for the next five years, and imposed a fine of Rs50,000 for what were deemed as contemptuous remarks against the judiciary.

In May 2017, as a Supreme Court-mandated joint investigation team was probing the Sharif family’s business dealings in the Panama Papers case, Hashmi had warned that those conducting the investigation would be “taken to task” for grilling the premier’s family. The video of Hashmi’s remarks had gone viral on social media and was also aired on news channels.

In December 2017, Sharif had also lashed out at the “PCO judges” who disqualified him and termed him dishonest.

Addressing a public meeting at the Ayub Stadium, he bitterly criticised the decision “made by five individuals” to oust a “thrice elected premier”.

“Those who had taken the oath under the PCO called me dishonest, those who had sworn in dictators,” he told the crowd at an event held to mark the 44th death anniversary of Pakhtunkhawa Milli Awami Party founder Abdul Samad Khan Achakzai.

A case against judges who took oath under the November 2007 PCO was dismissed last month by a bench headed by the chief justice.