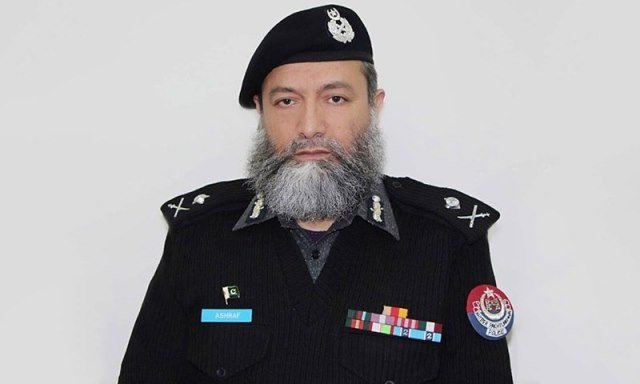 The suicide attacker, who was on a motorbike, rammed into the vehicle carrying the AIG and other police officials near Zarghooni Mosque as they were on their way to work this morning, the CCPO said, adding that the attacker then detonated his explosives. The blast left the police vehicle in flames, witnesses added.

There are conflicting claims regarding the number of dead and injured in the blast, and their identities.

According to CCPO Tahir Khan, who addressed the media following the blast, only AIG Noor had been martyred in the blast.

The CCPO added that at least six policemen had been injured and were shifted to Peshawar’s Hayatabad Medical Complex for treatment.

Sub-Inspector Ejaz, a police official who was present at the blast site, said that the AIG had lost his life in the blast, along with two others ─ a security guard and the vehicle’s driver ─ placing the death toll at three.

An AFP report quoting police said that the AIG’s bodyguard was killed in the attack, along with the high-ranking police official.

A rescue emergency officer, Naveed, claimed that the bodies of two dead were transported to a medical facility, one of whom was identified as the AIG, and another a member of his staff named Habibullah.

According to an initial probe report compiled shortly after the attack, the suicide attacker was identified as an 18-20 year old youth.

His bomb contained 15-20 kilograms of explosive material, the report said. He is believed to have been waiting at the site of the blast for the AIG’s vehicle, and he rammed into the vehicle at a u-turn.

Evidence has been gathered from the site of the blast for further investigation, the report said.

According to DawnNews, it is the first time a police official of AIG rank has been targeted in Peshawar. AIG Noor was born in Gilgit Baltistan in 1963. He joined the police force in 1989 and was promoted to BS-21 grade earlier this year. He was set to retire in 2023.

Prior to holding the position of AIG HQ, he was appointed AIG Elite Force Khyber Pakhtunkhwa.

The KP Police Department issued a statement describing the AIG as a “principled and honest man”.

“His sacrifice has renewed our resolve to conduct ourselves courageously,” the statement said.

“The KP police will continue to stand firm… Each police official from the IGP to a sepoy is ready to lay down their lives in this war [against terrorism],” the statement added.

Prime Minister Shahid Khaqan Abbasi “strongly” condemned the murder. “Our resolve to eradicate the menace of terrorism can not be shaken,” he said in a statement.

After the blast, security officials cordoned off the site and began a search operation in the surrounding area.

Although there has been no immediate claim of responsibility for the attack, the city of Peshawar has for decades been a victim of militancy due to its status as a front line for the ongoing war against terrorism as well as its proximity to the restless tribal areas and the Pak-Afghan border.

The number of attacks in the country has fallen around 70 per cent over the past year, due to a combination of the military offensive against Taliban bases along the Afghan border and government initiatives to tackle militancy, but attacks on security and civilian targets continue to occur occasionally.

The Pakistan Army had launched Operation Raddul Fasaad earlier this year in the aftermath of a fresh resurgence in terror attacks in the country.

The operation seeks to eliminate the “residual/latent threat of terrorism”, consolidating the gains made in other military operations, and further ensuring the security of Pakistan’s borders.

Hundreds of suspected terrorists have reportedly either been killed or arrested in raids carried out by security personnel since the start of the operation.