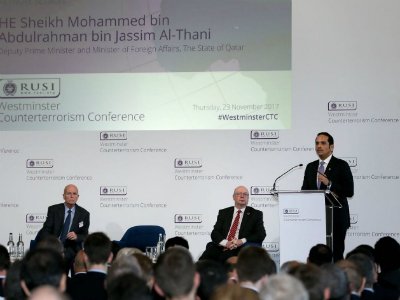 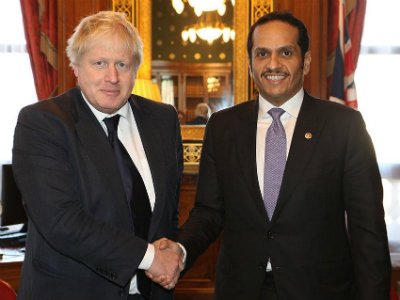 Addressing the Westminster Counterterrorism Conference, organized by the Royal United Services Institute for Defence and Security Studies (RUSI) on Nov. 23 and 24, Deputy Prime Minister and Foreign Minister said in a speech that the recent horrific events that took place across the world have placed terrorism under the spotlight.

He noted that the world is living at a time when terror attacks cannot be predicted, adding that these attacks are carried out by a small group of extremists who insist on harming and terrifying innocent civilians.

Sheikh Mohammed bin Abdulrahman Al-Thani said a lot has been achieved in the war on global terrorism and violent extremism but the battle is not over. He added that people in the United Kingdom and around the world continue to doubt the root causes of terrorism and solutions aiming to eradicate the cycle of violence but they have not reached a solution yet.

“This conference reflects Qatar’s continued desire for nations and organizations of goodwill to bond together to fight evil ideologies. Today we will exchange experiences, knowledge and enhance global cooperation, while working with our existing and hopefully new partners in the war against terror,” HE the deputy prime minister and foreign minister said.

“Although the Middle East was once a region of peace and coexistence, it has unfortunately been transformed into a region of turbulence and totalitarianism where extremism flourishes.

“We need to learn from history and build on perspective and experience to discover how to end the spread of extremism. So, who is the enemy and what is the root cause of terrorism? Tyranny, totalitarianism, aggression and the absence of justice.

“Regional conflicts in the Middle East and North Africa are threatening the lives of 24 million children, most of whom live in Yemen, Iraq and Syria. Recent examples of the catastrophes created by evil ideologies can be found across my region. Children who have lived through the mass atrocities of the Syrian regime, ISIS in Iraq and Syria or the war in Yemen are now young adults with little hope for better future.

“It is time for the international community to say enough is enough. We have to work together to end the discourse and begin rehabilitating these children. If we don’t act quickly, those desperate children will fall prey to the distorted ideologies of extremism,” he added.

HE Sheikh Mohammed bin Abdulrahman Al-Thani said the solution to end the cycle of violence and extremism is through “resolve, cooperation and perseverance.”

“As you know, Qatar, located in a turbulent region, has watched sister nations crumble to tyrannies and terrorists, and yet Qatar has managed to rank as one of the safest countries in the world. It has not been an easy achievement.

“For many years Qatar has stood together with allied nations like the United Kingdom in saying enough is enough. And Qatar remains resolutely committed to eradicating terrorism of all kinds. Qatar wants constantly to seek new collective approaches to the global threat of terrorism in a changing world.

Since 2004, HE the deputy prime minister and foreign minister said, “Qatar took aggressive steps to cut off the flow of finance to terrorists by developing the proper legislative framework and improving our financial monitoring system.”

“Since then, we have successfully identified and prosecuted individuals and organizations within our borders who are suspected of supporting terrorism, while implementing the rule of law and due process.

“Qatar has learned that the key to eradicating terrorism and its ideology must be through a holistic approach. By combining tough security measures with more lasting safeguards, we can all succeed,” HE Sheikh Mohammed bin Abdulrahman Al-Thani said.

The two sides discussed bilateral ties and the way to enhance them, in addition to development in the GCC and the region.

They discussed other issues of joint interest as well.