Pakistan: ‘Pay Taxes, I Will Protect Your Money’: PM Imran in Maiden Address to Nation 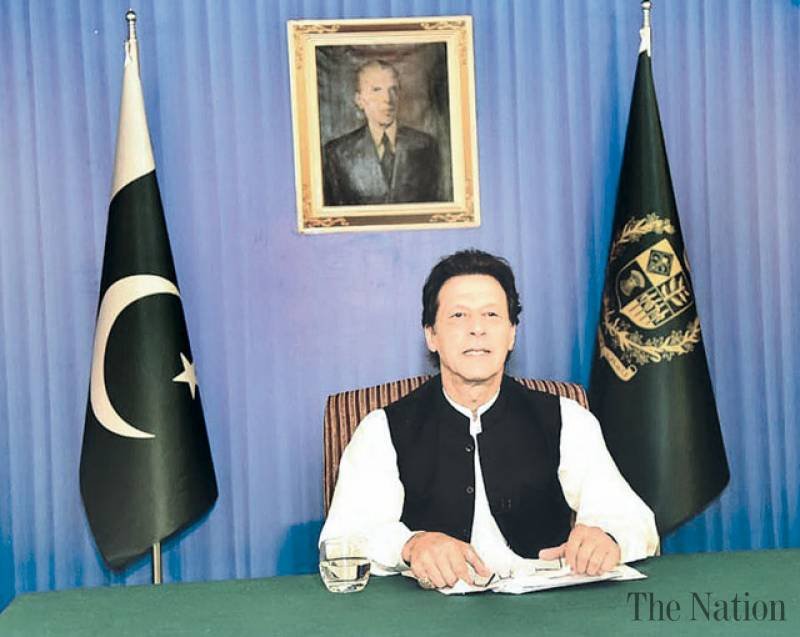 A day after he was sworn in, Prime Minister Imran Khan announced he will set up a task force to bring back the bulk of plundered public money from abroad.

He also pledged to assist the anti-corruption drive spearheaded by the judiciary and National Accountability Bureau (NAB).

“I will save (public) money,” Prime Minister Imran Khan said in his maiden address to the nation.

Khan outlined an ambitious roadmap, detailing a host of initiatives his government would pursue during its tenure.

Referring to the reports by the United Sates authorities suggesting that $10 billion were annually being whisked away from Pakistan through money laundering, he said: “This is your money. This is Pakistan’s money. We have to bring it back. You will be (on) my team in this battle.”

Taking an obvious jibe at his political foes who are accused of amassing undeclared wealth worth billions of dollars abroad, the PM said, “Never vote for a leader whose entire wealth is not in Pakistan.”

He said departments such as the Federal Investigation Agency (FIA) and Securities and Exchange Commission of Pakistan (SECP) would be restructured, enabling them to bring back the laundered money besides ensuring stricter anti-money laundering measures.

A ‘Whistle Blower Act’, like the one passed in Khyber-Pakhtunkhwa, would be passed and implemented across the country to take on corruption, he said.

Announcing that PTI’s government at the Centre and provinces would rigorously pursue an austerity drive, Khan said that he had opted not to live in a grand mansion like the Prime Minister’s House.

Instead, he said, he chose to reside in the official accommodation for the PM’s military secretary just outside the PM House.

The smaller residence comprises three bedrooms, Khan said, adding that he would keep two servants and two vehicles at his disposal as against a fleet of vehicles and a train of servants maintained by former prime ministers.

Dwelling on the existing expenditure incurred on the PM House, he said that it was spread over 1,100 kanals and was served by 524 employees.

He said that it operated a fleet of 80 luxury vehicles, 33 of them bulletproof.

The cost of each bulletproof vehicle was Rs50 million, the PM said.

He announced that redundant bulletproof vehicles would be auctioned and the PM House would be turned into a state-of-the-art university.

He said Rs 160 million were set aside in the budget for the Speaker of the National Assembly’s expenditure.

The former speaker NA had spent Rs80 million on foreign tours, he said.

“And the PM spent Rs. 650 million on foreign tours. Why waste this much public money? What did they really do on these tours that cost so much? Were they on a mission to conquer foreign countries?”

Pointing out the dismal condition of the national economy, Prime Minister Imran Khan pointed out that Pakistan currently owed Rs. 28,000 billion against Rs. 6,000 billion 10 years ago.

Highlighting the need for restructuring the Federal Board of Revenue (FBR), he said that it was necessary to expand the tax base.

For improving the tax collection, he said that taxing the privileged class was a logical option, instead of overburdening the salaried class.

He also announced setting up a task force to reduce expenses in government departments across the country.

These measures, he said, would be overseen by Dr Ishrat Hussain, who would also supervise reforms in civil services for capacity-building and ending the trend of political interference in affairs of bureaucracy.

The PM’s reform plans for police, education and health are detailed as under: Police at the centre and provinces where PTI is in power would emulate its reforms in the K-P police.

The KP-like Right to Services Act would be introduced and implemented for speedy public service by government departments. Former inspector-general police of KP Nasir Durrani, who played a key role in reforming the KP police, would play an advisory role in the reforms of Punjab Police.

In Sindh, where the PTI is not in power, it would approach the provincial government and extend cooperation for reforming the Sindh police.

Police force across the country would be depoliticised.

The capacity and standards of government schools would be improved, bringing them at par with the standards of private schools.

In KP, 150,000 children were shifted from private to government schools because of sharp improvements in quality of education.

Similar reforms would be implemented across the rest of the country. The target is to enroll 22.5 million children who are currently out of schools because of abject poverty.

As many as 2.4 million students of seminaries would be integrated into national social political fabric by reforms in the Madressah educational system.

Health insurance cards, covering medical treatment expenses of up to Rs. 550,000 in government hospitals would be issued for the poor and needy. Similar measures were launched in KP, where it proved to be a huge success.

In a bid to respond to the acute water crisis, Bhasha dam would be built immediately. The Supreme Court’s initiative would be fully supported. Instead of seeking foreign loans, contributions would be sought from Pakistani public at home and abroad.

Five million housing units would be built over the next five years, opening up job opportunities for youth. Loans would be provided to youth to set up businesses. They would also be provided vocational education.

The integration of the Federally Administered Tribal Areas (FATA) into KP would be completed ‘as soon as possible’ and tribal areas would be developed on an urgent basis after holding local government elections.

Sense of deprivation among the people of Balochistan would be redressed and efforts would be made to reintegrate dissident Baloch representatives into national socio-political fabric. A province in southern Punjab would be created as soon as possible. Issues concerning Karachi, including law and order, employment, sanitation and civic issues, would be assigned highest priority.

The 20-point National Action Plan would be implemented in letter and spirit to eradicate terrorism.

On foreign policy matters, Pakistan will work to have ‘best relations with all neighbours’

Steps would also be taken to make Pakistan a welfare state in the truest sense for protecting the rights of citizens by the state.