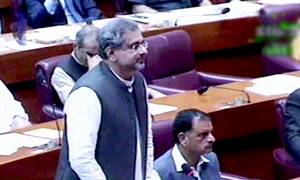 A total of 229 members cast their votes in favour of the bill while one opposed it.

Minister of Law and Justice Chaudhary Mahmood Bashir Virk piloted the bill further to amend the Constitution [The Constitution (Thirsty-first Amendment) Bill, 2018] in the House.

Amendments in seven articles of the Constitution were proposed under the bill. In the article 1 of the Constitution which defines the territories of Pakistan, it seeks to omit the paragraph “C” of sub-clause-2 of the article-1 under which FATA is placed as separate territory of the country like the four provinces. After the “C” omission, the federally administered tribal areas shall form part of the territory of Khyber Pakhtunkhwa.

It also seeks to amend the clause-1 of the Article-51 which defines the number of seats in the National Assembly as three hundred and forty-two. The draft bill seeks to reduce the number of seats from 342 to 326 and also replaces the table which gives the seats division between provinces and federal capital, given in the clause-3 with a new one with total 326 seats.

It adds a new clause called “3A” after the clause 3 to give legal cover to the representatives who will be elected from FATA in general polls 2018. They will continue as member of the national assembly till dissolution of the National Assembly and thereafter this clause shall stand omitted.

It removes the word “Federally Administered Tribal Areas,” from the clause-5 under which seats of the national assembly are allocated on population bases.

It also delete the sub-clause (b) of the clause-3 of the same article which states that 4 of the Senators elected from FATA shall retire after three years and 4 four after next three years.

Under Amendment to Article 106 of the Constitution, new clauses (1 A) and 1 (B) are inserted which deals with number of seats of FATA in the KP provincial assembly. Out of total 21 seats, 16 seats will be for general, four for women and one for non-Muslim. However, elections to the aforesaid seats shall be held within one year after the General Election, 2018.

The Articles-246 which deals with tribal areas, the clause “C” which defines and names the federally administered tribal areas is omitted. Furthermore, a new clause “d” is inserted which states that the laws applicable in these areas will remain applicable until repealed or changed by competent authority.

Meanwhile, the bill also seeks to omit the Article 247 of the Constitution.

Earlier, opposing the bill, Naeema Kishwar Khan of JUI-F regretted that neither rules nor procedures were being followed to bring the FATA reforms bill in the House. She said that JUI-F also wanted reforms in FATA but the process should not be done in haste. She was of the view that any decision about FATA should be done by its people.

Bilal-ur-Rehman from Aurakzai Agency said that the people of FATA did not want merger and termed , when this bill is being passed, as black day. He said that FATA should be given status of a province or council as the merger would be injustice with the people.

Dawar Kundi of PTI said that the FATA Jirga had opposed this FATA reform bill, adding that the merger was against the spirit of Federation. He said “We should encourage formation of more administrative units instead of merging the existing ones.”

Jamal-ud-Din of JUI-F said that the government has failed to fulfill its promises it had made with the people, adding the bill which is being introduced, is not beneficial for the people of FATA. He said that people of FATA should be asked what they wanted and warned that if any decision was taken against their will, it would not be in the country’s interest.

Abdul Qahar Wadan of PkMAP demanded that FATA people should be asked what they want. He was of the view that it was not in jurisdiction of the parliament to decide about the FATA’s merger, rather the powers were with the President of the country to conduct referendum in FATA and let the people decide what they want.

Shah Jee Gul Afridi said that FATA Reforms was the part of National Action Plan (NAP) which was signed by the JUI-F and PkMAP and now they were reneging from their promises.

Jamaat-e-Islami Parliamentary Leader Sahibzada Tariq Ullah said that FATA Reforms was good effort of the government but now it should not delay to present in the House.

Vice President PTI Shah Mahmood Qureshi said that it was historic day in the country history and all the political parties should work for the national interest above their political differences.

Prime Minister Shahid Khaqan Abbasi Thursday said that the historic bill passed by the National Assembly for merger of the Federally Administered Tribal Areas into Khyber Pakhtunkhwa would have positive outcomes for Pakistan and called for similar consensus for resolution of all national issues as demonstrated by the House today.

Addressing the National Assembly after the House adopted a landmark bill by two-third majority, the prime minister said both the treasury and opposition benches had shown a great spirit by supporting the government to enact the legislation.

He said the government had been striving to make the legislation for the last four years and had formed a FATA Reforms Committee led by Sartaj Aziz. Based on the committee recommendations, an implementation body was formed, comprising all stakeholders which helped to evolve consensus, he added.

The prime minister thanked opposition leaders Syed Khurshid Shah, Shah Mehmood Qureshi and Farooq Sattar for supporting the government and help accelerate the passage of the bill despite specific complications.