Pakistan: ‘Man of the Match’ Imran Khan Promises ‘All Policies for the People’ 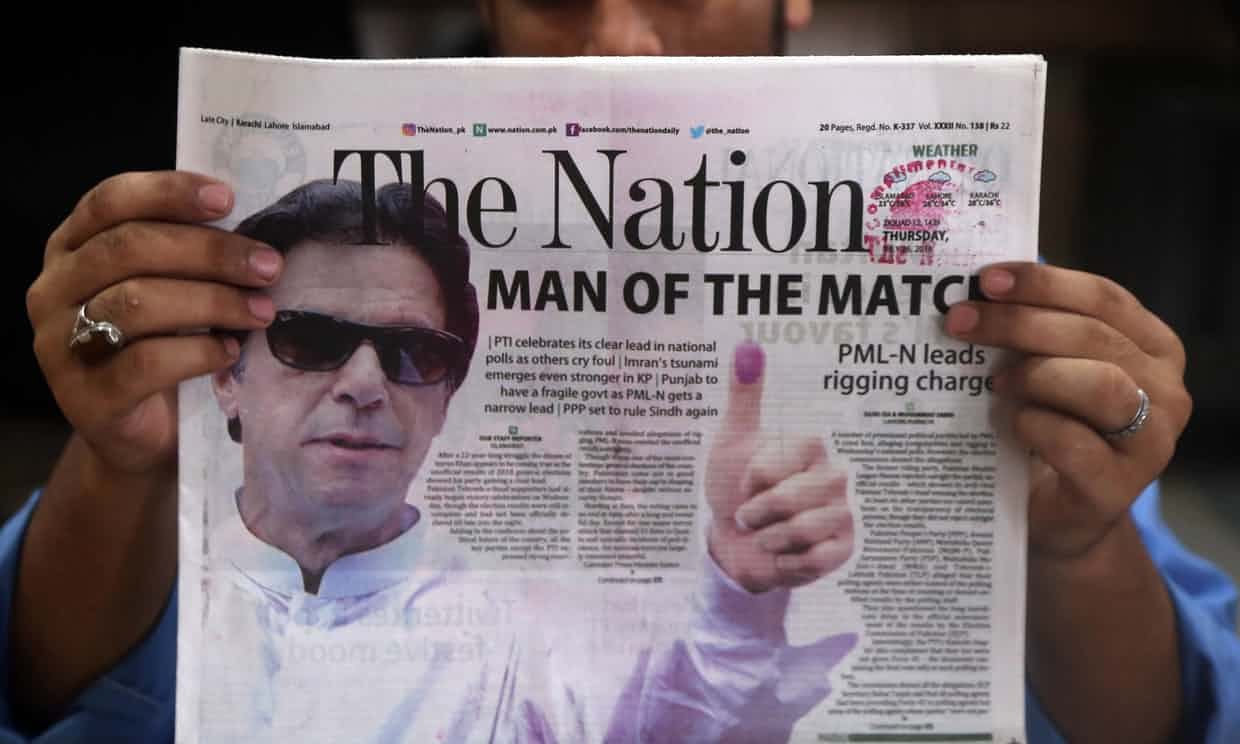 Pakistan Tehreek-i-Insaf (PTI) Chairman Imran Khan on Thursday, in his first public address since his party grabbed a lead in the preliminary General Election results, shared his vision for the country and pledged to safeguard the interests of ordinary citizens.

Khan, in a speech made in Bani Gala that was broadcast via video link, claimed victory, saying that he was thankful to have finally been given the chance to implement the manifesto he dreamed up 22 years ago.

“Thanks to God, we won,” he said. “We were successful and we were given a mandate,” the 65-year-old cricketer-turned-politician said during a live broadcast, adding that there was “no politician victimisation” in the acrimonious contest.

Addressing outcry by opposition political parties that the elections had been rigged or manipulated, Khan promised to provide them the assistance required to investigate such allegations. In the same breath he dismissed such allegations, terming yesterday’s polls “the fairest in Pakistan’s history”.

“If you think there has been rigging, we will assist you in the investigation if you have any doubts. We will stand by you. I feel that this election has been the fairest in Pakistan’s history. If any party has any doubts, we will open up the results of those constituencies for investigation.”

He commended the people of Balochistan who voted on election day, despite a suicide attack that left 31 people dead, and the armed forces who provided security for the polls.

“I want to clarify why I entered politics. Politics could not have given me anything. I wanted Pakistan to become the country that my leader Quaid-i-Azam Muhammad Ali Jinnah had dreamed of.”

“I want to share the kind of Pakistan I envision ─ the type of state that was established in Madina, where widows and the poor were taken care of,” he explained. “Today our state is in shambles. [But] all our policies aim to help the less fortunate prosper,” he said.

“Farmers are not paid for their hard work, 25 million children are out of school, our women continue to die in childbirth because we can’t give them basic healthcare, we can’t give the people clean drinking water. A country is not recognised by the lifestyle of the rich, but by the lifestyle of the poor. No country that has an island of rich people and a sea of poor people can prosper,” he said.

Although he claimed to have “suffered the worst kind of personal attacks” that any political leader has had to sustain over the last three years, “this is all behind me now”.

Imran’s promises at a glance

“I pledge to safeguard the nation’s taxes. We will decrease all of our expenses,” he promised.

“Our institutions will be stronger, everyone will be held accountable. First I will be subjected to accountability, then my ministers and so on. Today we are behind [other countries] because there is a separate system for those in power and a separate one for ordinary citizens,” he said.

“We are facing governance and economic challenges. Our economy has never been so abysmal. It’s because institutions have not been doing their jobs,” he explained.

“People are not investing in Pakistan. Another problem is unemployment, our youth does not have jobs. We will introduce a system that has never been implemented before ─ a kind of governance system that has not been seen before in this country,” he promised.

A country that has the highest number of people giving charity, but the lowest amount of tax revenue, he claimed.

“Our government will decide what we will do with PM House. I would be ashamed to live in such a large house. That house will be converted into an educational institution or something of the sort,” he said.

“The point is, we have to improve our condition, we have to formulate policies with the business community to increase wealth,” he said.

“We will improve tax culture. People will pay taxes because they will see that their taxes are being spent on them. We will help farmers, the business community and help the youth to find jobs and develop their skills. Our money will be spent on human development,” he added.

“Another challenge is foreign policy. No other country needs peace like we do. We will strengthen our relations with China, they have given us a chance by investing in the China-Pakistan Economic Corridor, and we also want to learn how to improve people’s lives, drag them out of poverty. Will also learn how to deal with corruption,” he said.

“Next is Afghanistan. They have suffered most in the ‘war on terror’, and before that in the Afghan jihad. Peace in Afghanistan means peace in Pakistan,” he said, adding that he envisions open borders with Afghanistan reminiscent to those within the European Union.

He said he wished relations with the US to be mutually beneficial, not one sided. Additionally, he said he and his party wanted stronger ties with Iran.

“Saudi Arabia has stood by us in our toughest times. We would like to be a reconciliatory state and help them resolve their inner tensions,” he said.

He added that he was very disappointed with how Indian media had, in the days leading up to the election, portrayed him as a “Bollywood villain”.

“I am a person who arguably knows the most people in India because of my days in cricket. We can resolve the poverty crisis in South East Asia. The biggest problem is Kashmir, every international organisation has said that there are human rights violations taking place in Kashmir,” he said.

“We want to improve our relations with India, if their leadership also wants it. This blame game that whatever goes wrong in Pakistan is because of India and vice versa brings us back to square one,” he said.

“This is not how we will grow, and it is detrimental to the sub-continent,” he said.

“If they take one step towards us, we will take two, but we at least need a start.”

“I pledge to our people that I will introduce a system that is for the masses, all policies will be for the people and not for the elite,” he vowed.

“I will live humbly,” he promised. “So far we have seen that everyone who comes to power changes. That will not happen with me.”