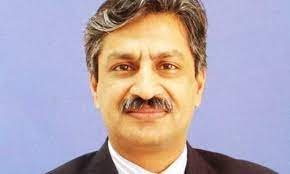 Senior journalist and former chairman of Pakistan Electronic Media Authority (Pemra), Absar Alam, was shot in Islamabad on Tuesday, he said in a video message uploaded on Twitter.

In a video shared by journalist Asad Toor, Alam can be heard saying he was shot at while walking outside his home.

“I’ve been hit in my ribs,” he said, adding that he had not lost hope. “My message to those who did this is that I am not going to be scared by such tactics,” Alam said in the video.

Federal Minister for Information and Broadcasting Fawad Chaudhry condemned the incident in a message on Twitter, adding that the police had been asked to investigate the attack.

Interior Minister Sheikh Rashid took notice of the attack, saying he had ordered the Islamabad IG to investigate. He directed that those involved in the firing should be arrested as soon as possible.

“Those who fired at Absar Alam will not be able to escape from the law. [They] will very soon be within the ambit of the law,” Rashid tweeted.

Soon after news of the attack was shared on social media, condemnations poured in from journalists and politicians.

PML-N Vice-President Maryam Nawaz lamented that “silencing the voice of dissent is a cancer that has plagued this country for many years,” adding that Absar Alam was the latest victim of this crime.

Anchorperson Kashif Abbasi also condemned the attack in a tweet.

At least 10 journalists were murdered and several others threatened, kidnapped, tortured and arrested in Pakistan on trumped-up charges while discharging their professional responsibilities in 2020 alone, according to the Council of Pakistan Newspaper Editors’ (CPNE) Media Freedom Report 2020.

No action has so far been taken against those responsible for torturing and killing journalists and it seems that such persons enjoy impunity. “It is a matter of grave concern that the legal system of the country has become useless in protecting and providing justice to journalists,” said the report.

They added that Jan was released by unidentified persons in a deserted area in Fateh Jang, outside the capital. He is sound and was not tortured during the period of his abduction, the sources said.