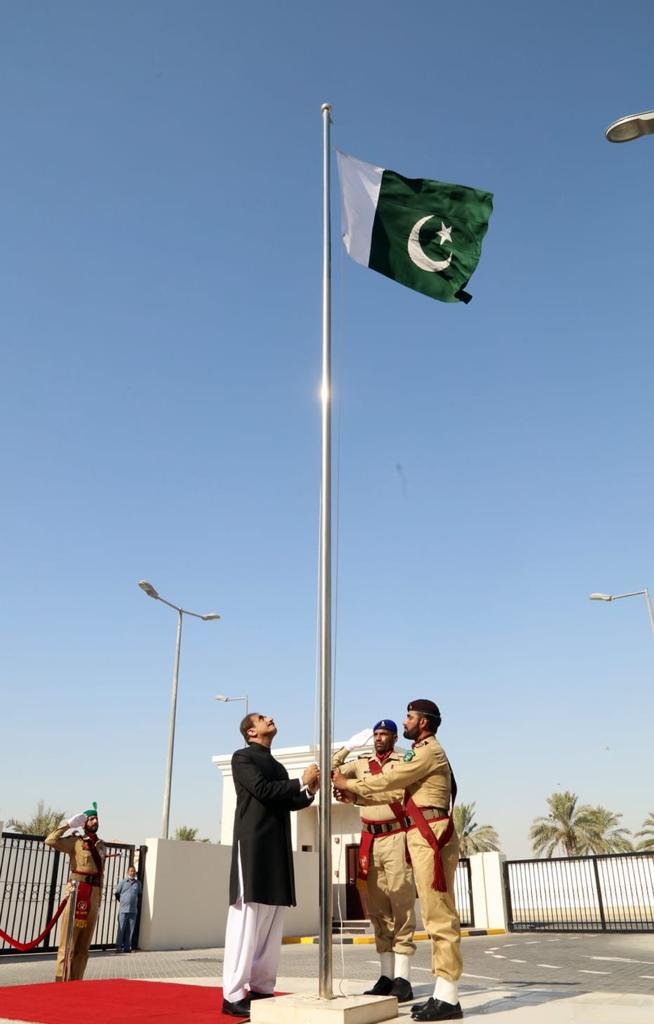 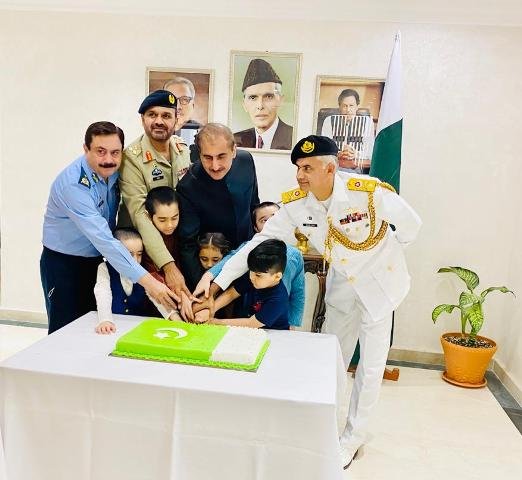 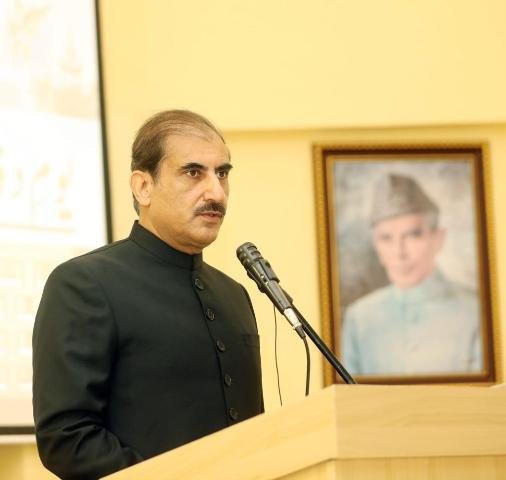 Defence Day of Pakistan was observed with due solemnity and reverence at the Embassy of Pakistan, Doha on Sunday, 6th of September.

To pay homage and tributes to Shuhada and Ghazis of Pakistan Armed Forces, Syed Ahsan Raza Shah, ambassador of Pakistan to State of Qatar participated in flag hoisting and cake cutting ceremonies. The event was held at the premises of Pakistan Embassy, Doha, Qatar.

Present on the occasion to pay homage and tributes to the Shuhada and Ghazis of Pakistan Armed Forces who rendered supreme sacrifice in defence of the motherland were members of Pakistani Armed Forces on deputation and Embassy staff.

National Anthem was played and Ambassador Syed Ahsan Raza Shah hoisted the national flag. A smartly turned out military contingent gave salute. Later, the participants witnessed an emotional and heart-warming documentary paying tribute to heroes of the nation who were awarded the highest gallantry award, the Nishan-e-Haider.

Speaking on the occasion, Syed Ahsan Raza Shah  highlighted the importance of the Defence Day in the history of Pakistan. He mentioned the sacrifices of members of Pakistan Armed forces in the line of duty, adding that the day not only is a remembrance of the martyrs and Ghazis, but also refreshes the enthusiasm and rejuvenates the resolve to work for the progress and prosperity of the motherland.  He said that the day inspires all Pakistanis to serve the country with greater dedication and to keep the green and white flag, which symbolizes the nation’s hopes and aspirations, flying even higher.

Pakistani envoy said that Pakistan strives for peace in the region and around the globe, and supports resolution of all disputes through peaceful means. However, the Pakistani nation and its armed forces are always fully geared up to confront any challenge threatening the national security, he added.  He also referred to the sacrifices of Pakistan in the global war against terror and mentioned the significant contribution of the Pakistan Armed Forces in UN peace-keeping operations and in providing humanitarian assistance globally in case of natural disasters.

Shah expressed pride in the contribution of the Pakistani community, which is a living bridge between the two countries, in the remarkable progress and prosperity of the State of Qatar.

Reiterating complete solidarity with the Kashmiri people, he called upon the international community to play its due role in seeking an end to the brutalities, violation of human rights and the reign of terror unleashed by Indian forces. Pakistan reiterates its unwavering political, moral and diplomatic support to the people of Indian-Illegally Occupied Jammu and Kashmir in their struggle for the realisation of the inalienable right to self-determination in accordance with the United Nations Security Council resolutions, the envoy added.

The ceremony concluded with prayers for progress, prosperity and solidarity of Pakistan.