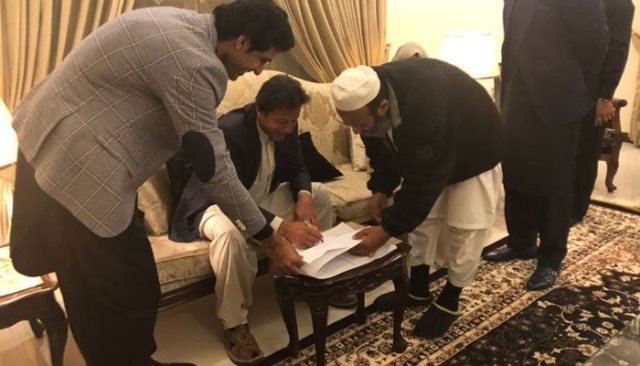 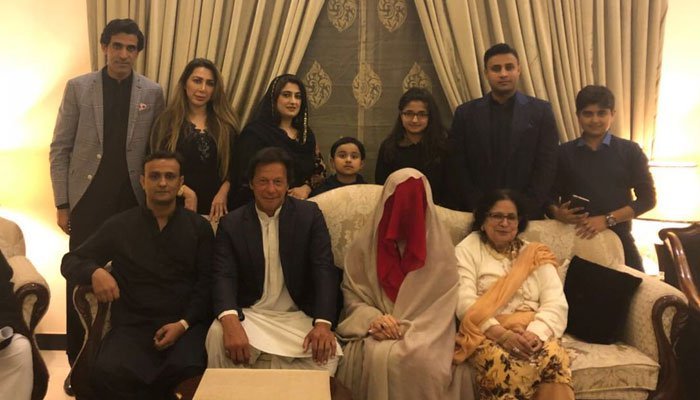 Pakistani politician and former cricketer Imran Khan has married a woman described as his spiritual adviser, party officials said, the third wedding for the World Cup champion once touted as Pakistan’s most eligible bachelor.

Former cricketer turned politician, Imran Khan in his age 67, announced today his third marriage  with recently divorced Bushra Bibi in presence of his few near friends and from bride family members. Single brother of three sisters, none of the sisters and his two sons from first wife Jemima Goldsmith attended the marriage ceremony.

Khan’s third marriage news was released by spokesperson of his political party Tehreek-e-Insaaf, whom he heads.

Bushra Bibi, couple of years earlier came on surface when news about Imran Khan started printing in media seeking spiritual advise from a female ‘living saint’ Bushra Bibi.  It is also reported in Pakistani media that it was his lady spiritual leader who advised him to get rid from his family house in Lahore which is a hurdle in his ambition to be prime minister of the country. Imran Khan disposed off that house where his separated elder sister was having shelter along with her children.

Imran Khan carries history in Europe as a socialite and play boy from his youth time during his studies and cricket tenure. He brought 1992 World Cup in Cricket for Pakistan.

He married from British billionaire family Jemima Goldsmith on May 16, 1995 and got divorce from her on 22nd June 2004.  Both have two sons.

He knot second time in last quarter of 2014 to Reham Khan, a TV host and BBC weather segment. He was holding a 4 months long political rally against government of deposed Nawaz Sharif in 2014 when he had announced that he will get married once Naweaz Sharif is ousted from government. It took four years when Nawaz Sharif was disqualified  by the Superior courts on charges of keeping residence permit of United Arab Emirates, however, Khan already got married during his rally but publicly was only announced on January 8, 2015.  In  October, 2015, trough a tweet message, he sent open divorce message publicaly.

About his third marriage with Bushra Bibi, news was revealed by media couple of weeks before, however, Imran Khan had denied and said that he had sent a proposal to her for marriage.

Reham Khan in a recent interview told that she was shocked when Imran Khan kept secret their marriage and rather refused before media  for some time.

Imran Khan, born in Lahore belongs to a Punjabi Niazi family. His father was a bureaucrat and was expelled from government job during Yahya Khan military government on famous corruption cases when 303 officials were sent home. He obtained his education from Pakistan’s prestigious Aitchison College and then at Oxford University, UK.

Talal Chaudhry, State Minister of Interior, Pakistan sent congratulations and good wishes to PTI Chairman Imran Khan on his third marriage, but pointed out that he should not have lied by rejecting media reports that he had tied the knot on 1st of Jan.

But he asked ‘what was the point of lying about it? One should know what they are supposed to do at their age,’ he said.

He said that Nawaz sharif was fortunate to be elected three times as Prime Minister of Pakistan, whereas, Imran Khan is lucky to get married third time. In 2018, Nawaz Sharif once again has possibility to be elcted as Prime Minister, so Imran Khan may also get 4th time.  However, he said that “I hope this time (Third) his marriage remains successful.’