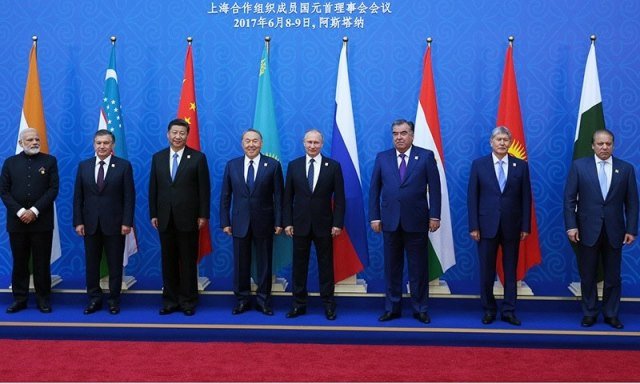 Kazakh President Nursultan Nazarbayev in his inaugural speech during the 17th SCO summit welcomed Pakistan as full member of the organisation.

Prime Minister Nawaz Sharif, addressing the summit, said, “The SCO goals resonate with Pakistan’s national ethos, and so do the core values of the Shanghai spirit and the SCO charter with our own quest for peaceful neighbourhood.”

The premier welcomed a proposal made by Chinese President Xi Jinping on a five-year treaty for good neighbourliness among SCO members, and thanked the founding members including China, Russia and others for their staunch support to Pakistan.

“As leaders, we should leave a legacy of peace and amity for our future generations, not a toxic harvest of conflict and animosity. Instead of talking about counter-weights and containment, let us create shared spaces for all,” PM Nawaz urged SCO heads of state.

The PM congratulated India, which also became a full member of the SCO today.

He added that in the coming decades, the SCO, which has emerged as a ‘sheet anchor’ for regional stability would serve as a strong link between Asia Pacific, East Asia, West Asia and the Atlantic region.

“It is destined to become a cornerstone of global politics and economics, with economics gaining primacy,” PM Nawaz said.

“The SCO gives us a powerful platform for partnerships to promote peace, build trust and spur economic development for shared prosperity.”

Expansion of the SCO has taken place at an ‘opportune time’, Nawaz said, as China’s ‘One Belt, One Road’ (OBOR) initiative has transformed the global economic landscape.

“In Pakistan, we are diligently implementing the China-Pakistan Economic Corridor, which is a flag of the OBOR,” the PM said. “What is more, these megaprojects will benefit the entire SCO community.”

Pakistan, which has been an observer at the SCO since 2005, applied for a permanent membership in 2010. The decision to grant Pakistan membership was made by the SCO Heads of States in a meeting held in Ufa, Russia, in 2015.

Founded in 2001, the SCO is comprised of six member states, mainly focusing on military cooperation between the members which involves intelligence sharing and counter-terrorism operations in Central Asia.

Pakistan and India ─ who until now had been observers ─ have become the first nations to be inducted as members since the formation of the organisation.

PM Nawaz attended the summit along with a delegation comprising Adviser to the PM on Foreign Affairs Sartaj Aziz, Minister for Commerce Khurram Dastgir Khan and Minister of State for Petroleum Jam Kamal.

Both leaders discussed bilateral ties during their meeting which comes days after Ghani at the Kabul Process lashed out at Pakistan, accusing it of waging an “undeclared war of aggression” against Afghanistan.

Earlier, PM Nawaz exchanged pleasantries with Indian Prime Minister Narendra Modi in their first meeting since 2015, when Modi stopped by Lahore on a ‘surprise visit’ to meet the premier on his birthday.

UN Secretary General felicitates Pakistan
United Nations (UN) Secretary General Antonio Guterres congratulated Pakistan for attaining a membership in the SCO during his meeting on the sidelines with Sharif, according to a press release issued by the Ministry of Foreign Affairs.

Sharif said there were “legitimate expectations” for the UN to play its role in the resolution of the Jammu and Kashmir issue and other global challenges.

The premier supported the secretary general’s call for cooperation in advancing peace by resolving disputes through dialogue and negotiations, agreeing that success in conflict prevention and resolution could only be achieved via talks.

Appreciating the country’s role in the international community, the UN chief appreciated Pakistan for hosting Aghan refugees for the past 37 years, the press release said.

In a separate meeting on the sidelines of the summit in Astana, the prime minister met Russian President Vladimir Putin where the two leaders discussed matters pertaining to bilateral interests, according to a report by Radio Pakistan.

The two discussed matters of mutual interest between the two countries and cooperation in different areas.

Advisor on Foreign Affairs Sartaj Aziz and Minister for Commerce Khurram Dastgir were also present at the meeting.

During the meeting, Modi thanked the Chinese president for supporting India’s bid for full membership of the SCO.

“I am grateful to you for your efforts and support for India’s SCO membership,” ToI quoted Modi saying to Jinping.

“Met President Xi Jinping. We spoke about India-China relations and how to further improve ties,” Modi tweeted after the meeting.

The meeting between the two leaders comes weeks after India made the decision not to send an official delegation to the “Belt and Road Forum” in Beijing where Jinping hosted dozens of world leaders senior officials, touting his vision of a new “Silk Road” that opens trade routes across the globe.

India has criticised China’s global initiative and warned of an “unsustainable debt burden” for countries involved.

India has also remained incensed that the CPEC ─ one of the key OBOR projects ─ passes through Kashmir and Pakistan, claiming that it is a violation of India’s territorial integrity.