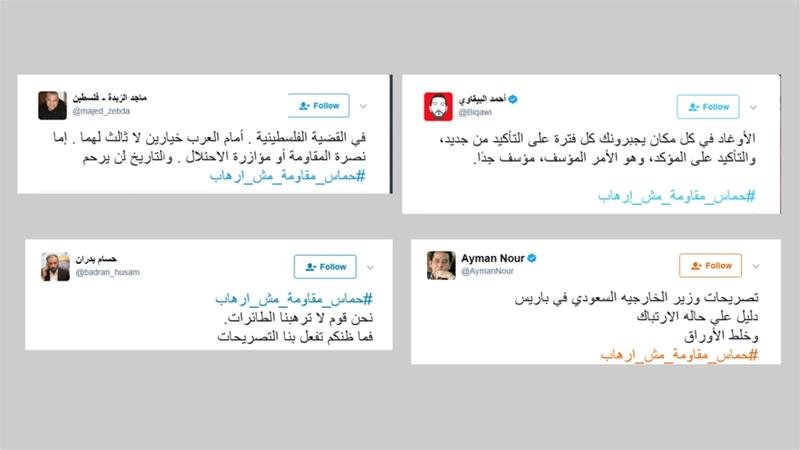 Following recent statements by the Saudi foreign minister calling on Qatar to end its support of Hamas, social media users in the Arab world reacted in support of the Palestinian resistance movement and to counter the minister’s statements which characterised Hamas as a “terrorist organisation”.

The hashtag translating as “Hamas is resistance, not terrorism” (#حماس_مقاومة_مش_إرهاب), took off on Thursday.

Figures showed that the tweet was most used in Palestine, and was one of the active tweets used in Qatar, Jordan, Egypt, Algeria, Qatar, Oman and Libya.

Thousands of social media users stressed that resistance is the right of the Palestinian people in order to obtain freedom from the Israeli occupation. They also said that speaking about Hamas as a “terrorist movement” is doing a service to Israel and echoes the statements of Israeli Prime Minister Benjamin Netanyahu.

They also said Hamas’ position as a resistance movement is not a matter to be disputed in the Arab world.

Palestinian analyst, Sari Orabi, wrote on Facebook: “We are not obliged to affirm that which is not being disputed; only the criminals and lowlifes disagree with us, and they know themselves.”

20 January 2022 By Ashraf Siddiqui More than 7,000 books of different ...
END_OF_DOCUMENT_TOKEN_TO_BE_REPLACED