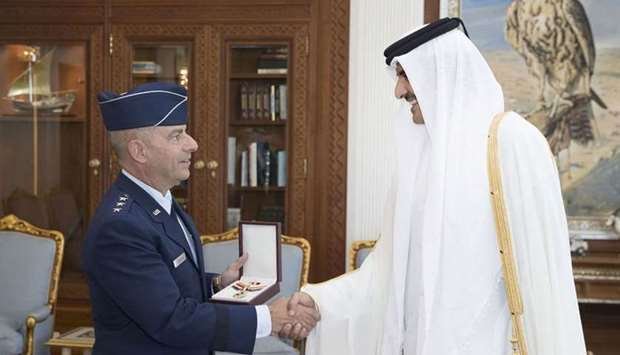 Amir of Qatar, Sheikh Tamim bin Hamad AlThani met today on Tuesday Lt. Gen. Jeffrey Harrigian, Commander of US Air Force Central Command in Southwest Asia  and his accompanying delegation who came to greet ruler of State of Qatar on completion of his assignment.

They reviewed mutual strategic relations especially in the areas of military and defense fields, joint efforts in fight against terrorism and a number of other issues of mutual interest.

In recognition of his services towards strengthening strong relations and strategic partnership between the two friendly countries, Amir of Qatar decorated him with medal of Sheikh Joaan for military bravery (First Class), one of the military honours given on exceptional service in the military field.

Amir of Qatar thanked the Commander of the US Air Forces Central Command for his role in promoting joint action between Qatar and the United States of America, especially in the fight against terrorism.

Lt. Gen. Harrigian expressed his gratitude to Amir of state of Qatar on receipt of the medal.