Ousted Korean President Park Gets 24 Years in Prison on Corruption 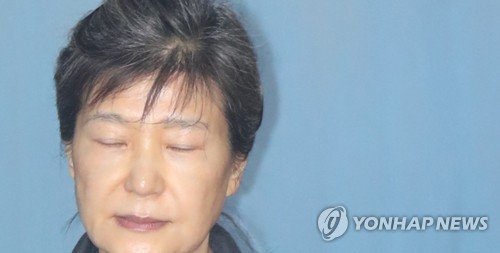 Former President Park Geun-hye was sentenced to 24 years in prison and fined 18 billion won (US$16.8 million) on Friday in a ruling on a massive corruption case that led to her removal from office early last year.

Prosecutors had demanded a 30-year jail sentence and 118.5 billion won in fines on a total of 18 charges. She was arrested in March 2017.

Park took office in early 2013 as South Korea’s first female president. She became the nation’s first elected head of state to be ousted by the Constitutional Court in March 2017 and now the third former leader to be convicted of corruption.

The court ruled Park conspired with her longtime confidante Choi Soon-sil in coercing large businesses into providing or promising a total of 23 billion won in bribes. Choi was sentenced to 20 years in a separate trial in February.

“The defendant abused the presidential authority delegated from the people and as a result brought huge disruption to the order of state affairs, and it led to the unprecedented presidential impeachment,” Judge Kim Se-yun said in the televised trial.

But she did not repent of her wrongdoing and continued to transfer the responsibility to others around her, he added.

She should be severely punished to prevent such an unfortunate event from recurring in the nation, the judge said.

The court ruled that Park and Choi extorted 7.3 billion won from Samsung Group. Park was found to have pressured Lotte and SK groups to donate 7 billion won and 8.9 billion won, respectively, to Choi’s nonprofit foundation in exchange for business favors. SK did not provide the money.

Park also influenced other large companies to award contacts to companies run by Choi or her acquaintances, the judge said.

She was also convicted of abuse of power in connection with her aides’ blacklisting of artists deemed critical of her government. Those on the list were denied state support.

The court found her responsible for the dismissal and demotion of officials who defied the orders to disadvantage the artists.

The scandal broke in October 2016 sparking massive weekend street protests that lasted for six months. The National Assembly voted to impeach her in December and the Constitutional Court ruled to formally remove her from office on March 10 the following year.

Park did not appear in Friday’s sentencing trial. She has been boycotting the hearing in protest at the court’s October decision to extend her detention by six months.

Outside the courthouse, Park’s supporters staged a rally demanding her release and protesting what they called a politically motivated investigation. Police bolstered security around the court, dispatching 3,300 officers.

Park is the eldest daughter of late former President Park Chung-hee. The former army general took power in a coup in 1961 and ruled the country for 18 years.

She spent her early years in the presidential palace Cheong Wa Dae. At 22, she took the role of first lady after her mother was shot and killed by a pro-North Korea agent in 1974. Five years later, her father was gunned down by one of his closest aides.

Park entered politics in 1997 and became an icon of conservatives while serving as a lawmaker for five terms and chairing her party twice.

She cemented her position as the conservative leader by spearheading the party’s landslide victory in general elections in 2004, earning the nickname “Queen of Elections.”

Her first attempt at the presidency was unsuccessful. She lost to Lee Myung-bak in a 2007 primary for the party’s presidential candidacy.

In 2012, she won the presidential election by beating rival Moon Jae-in. She reminded voters of the old good days of her father, who led the country’s rapid economic growth. She also conjured up an image of a corruption-free leader, saying she had no family to care about and so had no reason to amass wealth.

Her presidency ended in the corruption scandal one year before her five-year term finished.

Park’s predecessor, Lee Myung-bak, has also been arrested over a string of corruption charges that center on his suspected ownership of a lucrative auto parts company currently run by his brother.

Park and Lee are only the latest in a series of of South Korea’s former heads of state facing criminal investigation.

Roh Moo-hyun, Lee’s immediate predecessor, was grilled in 2009 over a corruption scandal involving his family. The probe was closed after he committed suicide in May that year.

Chun Doo-hwan and Roh Tae-woo, who seized power in a 1979 coup and ruled the country from the 1980s to the early 1990s, were convicted of corruption and mutiny but were pardoned in 1997 by then-President Kim Young-sam. Kim and his successor Kim Dae-jung also saw their sons charged with bribery.