‘Not Fair Turkish Cypriots Living Under Embargoes Due To Unwillingness of Other Side’, President Mustafa Akinci 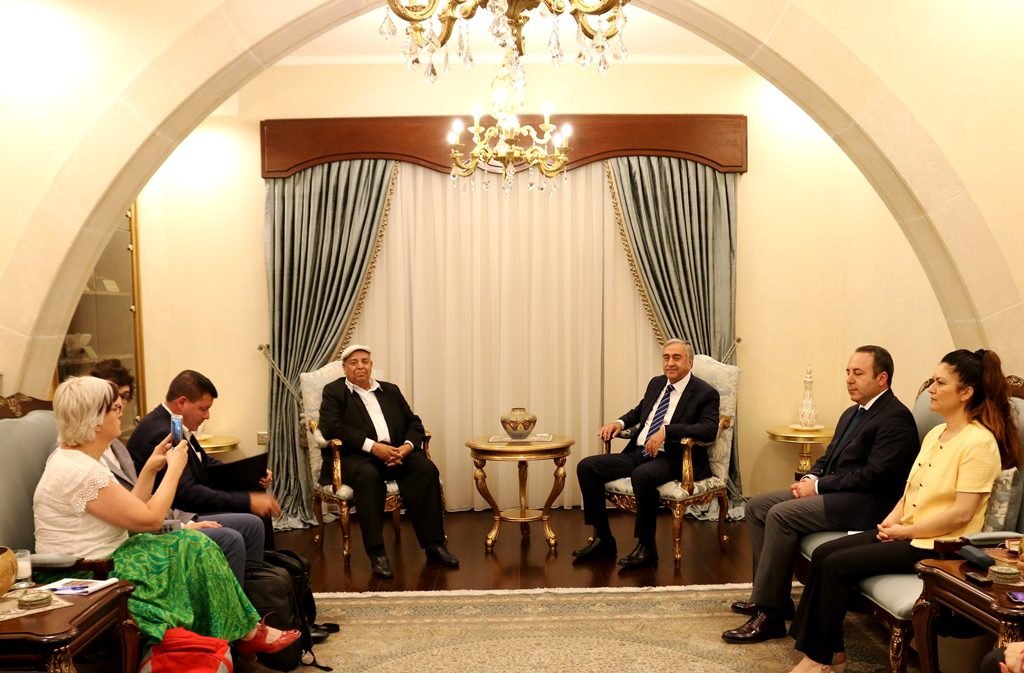 President Mustafa Akıncı has said that “It is not fair that the Turkish Cypriot people are living under embargoes due to the unwillingness of the Greek Cypriot side for a solution”. He was talking to a group of visiting journalists from Canada, Europe, Middle East and Central Asia.

On the recent failure of Crans-Montana, Switzerland meetings between North & South parts of the Cyprus, TRNC President said that ‘we cannot adopt the notion of ‘0’ troops and ‘0’ guarantees. We displayed our understanding which is based on decreasing the military factor as the agreement will be implemented and cooperation and confidence will increase, Akinci said.

“We don’t have any responsibility in not reaching a conclusion”, President Mustafa Akıncı said that from the beginning Turkish Cypriot side has been spending efforts in order to be one of the two equal sides in Cyprus. “our vision for being one of the two equal partners who unites Cyprus with a solution is very clear.”

On presence of Turkish troops presence on the island, Akıncı said that “Turkey used her rights emanating from the 1960 agreements and intervened on 20 July 1974 preventing the unification of Cyprus to Greece”.

Indicating that after 20th of July 1974 the foundations of a bi-zonal, bi-communal structure were established, Akıncı said that the main principles of a possible solution evolved with the summit agreements between Denktaş and Makarios and between Denktas and Kipranou in 1977 and 1979.

All efforts for finding a bi-zonal, bi-communal federal solution based on political equality since those days have been unsuccessful, said Akıncı.

President Akinci said that TRNC has a number of options including worst to worst for our people safety and security may join as part of Turkey, however, it is an option in case of all doors closed on us. ‘None of the Turkish Cypriot likes presence of Turkish forces or joining Turkey, however, if we are pushed badly, we will have to safeguard our lives and security.

Akıncı expressed that they have spent intense efforts for the last two years and they provided for the presentation of maps by both sides for the first time in the negotiation history and also for the convening of the 5-party conference. Akıncı also added that the Turkish Cypriot side and Turkey have been the side which want a solution in Cyprus.

However we do not have any responsibility in not reaching a positive conclusion even if we desired it so much.”
Stressing that they gave great importance to equality, security and freedom for a solution to be reached, Akıncı expressed that they wished this for both communities not just for the Turkish Cypriots, and they always took steps for one side’s security not being a threat for the other side.

Akıncı also said that Annan plan was sometimes on the agenda of the negotiation process but Greek Cypriot side never took into consideration that Annan plan was a whole and also it included the sensitivities of the Turkish Cypriot side. Although Greek Cypriots refused the Annan plan in 2004, during the final negotiation process, they demanded some parts of the plan which was for their advantage and never wanted to remember the sensitivities of the Turkish Cypriot side.

Stressing that during the two years negotiation process, very important developments were experienced, Akıncı said that if the Greek Cypriot side showed a more realistic and reasonable approach for the rest 8-10 separation points, it would be possible to reach an agreement in Cyprus.

Stating that one of the greatest problem was experienced on the property issue, Akıncı said that Greek Cypriot side insisted on some proposals which included uncertainty and disturbed the Turkish Cypriot people, and also on some arrangements which would give harm to our economy. Akıncı expressed that Greek Cypriot side never wanted to understand that uncertainty on property issue would be one of the important reasons of “no” votes of a possible referendum.

Furthermore, President Akıncı said that Greek Cypriot side deliberately made false statements that Turkey and Turkish Cypriot side demanded right of residence for 80 million Turks but this is not real.

Adding that although it was determined that some little changes on the Customs Union Agreement would be enough and the EU authorities expressed during the Cyprus Conference that it would not be a serious problem, Akıncı said that Greek Cypriot side continued to exploit this issue.

TRNC President stressing that Turkish Cypriots’ continuing to live under embargoes due to Greek Cypriot side’s being unwilling for a solution is not fair, Akıncı said “ As I have always expressed, we will continue our path with being conscious of our responsibilities to build a future in peace. We want to live in this island in peace and cooperation. We will continue our evaluations within the country and with Turkey. We will be realistic”.

President Mustafa Akinci said that equality, freedom, and security will always continue to be the Turkish Cypriot side’s essential principles.