Nobody Including Me Can Replace Nawaz, says Shehbaz 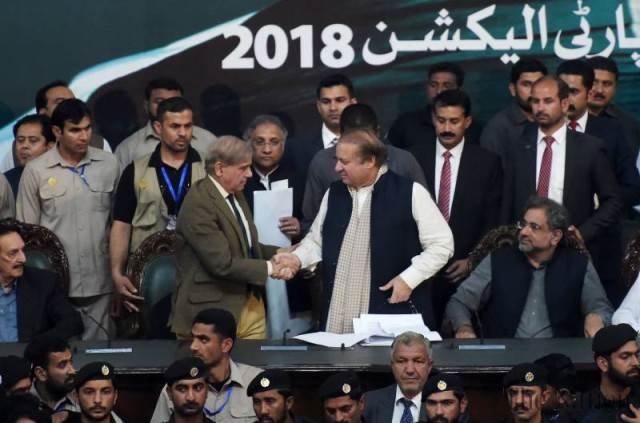 The debacle at the Senate was the latest blow to the Pakistan Muslim League-Nawaz (PML-N) following a string of court decisions targeting the party — including the removal of Nawaz from the premiership for graft in July.

Despite the loss at the Senate, newly minted PML-N leader Shahbaz Sharif appeared upbeat during a rowdy party meeting in Islamabad, praising his brother’s leadership ahead of general elections due later year.

“Nobody including me can imagine taking the place of Nawaz Sharif,” Shahbaz told a roaring crowd chanting party slogans.

In late February, the party cleared the way for Shahbaz’s promotion to head the PML-N, spurring renewed speculation that he would be its choice for prime minister if it prevailed at the polls.

The younger Sharif, currently chief minister of powerful Punjab province, is seen as a political dealmaker, with many crediting him for successive by-election victories since his brother was ousted.

But he faces steep challenges after the party’s candidate lost in the race to lead the upper house just weeks after winning the largest number of seats in the Senate.

The PML-N cried foul, following an unlikely alliance forged by the opposition PakistanTehreek-e-Insaf and the Pakistan People’s Party.

Independent candidate Sadiq Sanjrani — a relatively unknown figure — secured 57 votes in the 104-seat house in the secret ballot, triggering veiled accusations that Pakistan’s powerful security establishment had a hand in the outcome.

“Being herded like sheep and goats, the nation has seen your real face today,” tweeted Nawaz’s daughter Maryam.

The Sharif clan and their supporters have repeatedly denied allegations of corruption, suggesting Nawaz is the victim of a conspiracy driven by the military.

Despite the court rulings against the PML-N, the party will likely remain a force at the polls after whipping its rivals in consecutive by-elections.