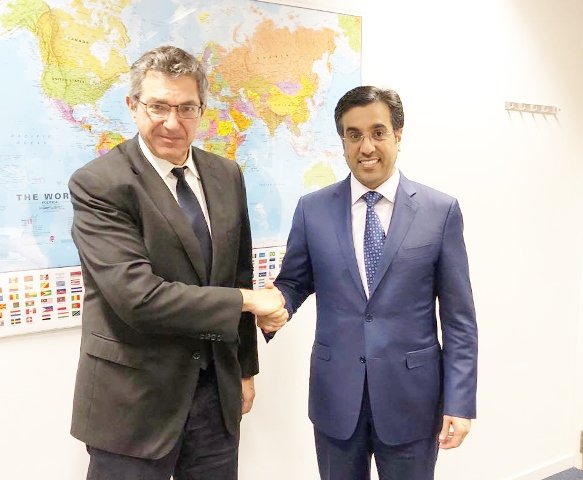 Dr. Ali bin Smaikh Al-Marri, President of National Human Rights Committee of Qatar( NHRC) called on the European Union to take strong measures and take steps to condemn human rights violations which have affected thousands of families in Qatar and the Gulf States for more than a year due to the embargo imposed on Qatar.

During his meeting in Brussels with Strafros Lambrenides, European Union Representative for Human Rights,  Dr. Ali Bin Smaikh presented a copy of the fifth report prepared by the National Human Rights Commission on the anniversary of one year of siege.

He asked to visit State of Qatar and the siege countries to address the humanitarian violations resulting from the embargo on Qatar. Pointing out that the visit of the representative of the European Union to find out the repercussions of the embargo and its effects on the peoples of the Gulf region will play a key role and is a significant contribution to resolve the humanitarian crisis.

He cleared that more than a year after the siege imposed on Qatar, citizens and residents of Qatar no longer accept the political positions of some countries, which only verbal condemnation of the violations of the embargoe, without being followed by practical and deterrent decisions that would triumph for human rights before political interests between countries.

Al-Marri called on European Union representative Strafros Lambernides to inform the EU representatives that the victims of the blockade are citizens and residents of Qatar and also of the blockade countries, who are waiting for more effective and strong positions to stop the violations, stressing the need to move from the stage of verbal convictions to decisions and adopting of procedures.  Steps in this regard taken by EU will strengthen its credibility of it’s institutions among peoples of the world.

He said that the EU countries have the procedures and mechanisms to exert pressure on the countries of the blockade to stop on-going violations, in line with the principles on which the EU institutions were founded.

During his meeting with Chiara Adamu, Head of the Gender Equality, Human Rights and Democratic Governance Unit of the European Union’s Department of International Cooperation and Development, Dr. Ali Bin Smaikh highlighted the disastrous humanitarian impact on children in particular due to the siege imposed on Qatar.

He pointed out that thousands of Qatari, Emirati, Saudi and Bahraini children were deprived of their parents and were prevented from traveling with their parents due to the possession of these children or the father or mother of the Qatari citizenship. He said that the children were subjected to a human crime that can not be tolerated.

He said that the silence of countries and governments on the continuation of the embargo imposed on Qatar for more than a year, is no longer acceptable. Al-Marri asked the EU countries to show the same rigor as those dealing with labor rights issues in the Gulf region to dealing with human rights violations resulting from the Gulf crisis.

Dr. Ali Bin Smaikh AlMarri and Ms. Chiara discussed various possible avenues of cooperation between both the organizations. It is expected both sides may sign a partnership agreement in light of ongoing work with national human rights institutions.