NHRC President Lauds UNOHCHR’s First Report on Siege, ‘To Remain Neutral on Human Rights Abuses is Itself Against Human Rights’ 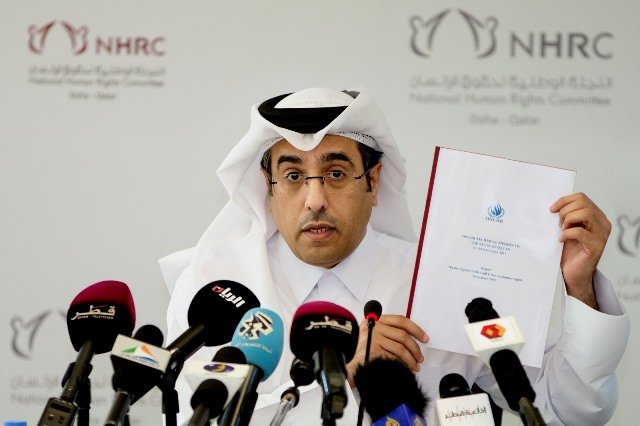 Dr. Ali Samikh AlMarri, President of National Human Rights Committee of Qatar hasHe asked thanked UN Office of High Commissioner for Human Rights on the first ever report released on the drastic impact on common person from the siege of Qatar since last 7 months by the neighboring countries of Saudi Arabia, Bahrain and United Arab Emirates. from inter-marriages, businesses, education, free movement to religious practices.

He stressed on the blocked countries to look positively on the report and lift the blocked against State of Qatar to provide relief to Qatari nationals and the expatriates living in Qatar.

Dr. Al Marri asked Office of the UN High Commissioner on Human Rights to include this report into UN Secretary General Report and to follow these blocked states to lift the blocked by using his offices and other related organizations.

Dr. Ali AlMarri has asked government of Qatar to use this report on various platforms to convince specially ‘Neutral’ states. He said being neutral on human rights abuses is itself against human rights.

Dr. Ali AlMarri has asked Compensation Committee of Qatar to use this UN report to show to International Court of Justice to get compensation early against their claims of damages to the affected people.

– Ministry of Economy and Trade;

– Ministry of Labour and Social Affairs;

– Director of the Salwa crossing point with Saudi Arabia;

– Editors in chiefs of all main local newspapers,

– Regional representatives of UNESCO and UNODC.

The team interviewed about 40 individuals to get a better understanding of their situation.

– The report referred to the measures taken by the Government of Qatar, and other important information on the treatment of violations by government authorities and the alternative measures taken to alleviate the suffering.

– The report is merely a summary of the violations, while all the detailed cases are handed over to the mission; to deliver them to the OHCHR concerned officials and the United Nations Special Rapporteurs.

Conclusions of the Technical Mission:

– The report officially described the measures taken by the countries of the blockade as unilateral coercive measures as defined and standardized by the United Nations.

– The report also described these measures as non-disproportionate and discriminatory.

– The report described that the majority of the measures taken make no distinction between the Government of Qatar and its population.

– The report stated that there is no evidence of any legal decisions motivating the various measures taken, and due to the lack of any legal recourse for most individuals concerned, these measures can be considered as arbitrary.

– The report also states that the considerable economic impact of the crisis takes over the dimension of an economic warfare, with significant financial losses for the State, companies and individuals; where Qatar has promptly absorb the shock.

– The report stressed the negative and critical impact of arbitrary measures on individuals as well as the deep psychological impact on the population as a result of the campaigns of incitement, media defamation and campaigns against Qatar, its leadership and people.

– The report stated that the majority of cases remain unresolved and are likely to durably affect the victims.

– The report affirms positively that the Government of Qatar would not take any measures of reprisal against citizens of KSA, UAE, Bahrain and Egypt working in Qatar.
– The report expressed that all interlocutors met by the team evoked the lack of trust or even fear this situation has generated, and concerns about the social fabric of very closely-knit societies eroding.

– The report stressed the need to communicate with the four countries to determine the impact of their actions on their citizens and residents.

– The report praised in many points the efforts of the Government of Qatar and some of its authorities and ministries including the National Human Rights Committee specifically in finding solutions to the worsening humanitarian cases of the victims.

– The National Human Rights Committee welcomed the report of the mission, despite some observations regarding the statistics of the affected people, as well as insufficient attention to some violations.

– This report is the first of its kind issued by an international organization, condemning the decisions and measures taken by the countries of blockade after seven months of blockade and documenting the resulting violations.

– This report affirms, in a non-interpretive manner, that the measures adopted by the countries of the blockade are arbitrary and unilateral and explicitly violate international law, the principles of international relations and human rights conventions.

– The report also affirms that the crisis is not merely the severance of diplomatic relations, and that it amounts to collective punishment.

– The report asserts that the violations against citizens and residents of Qatar and citizens of the GCC countries are not allegations as claimed by the countries of the blockade, but are they substantiated.

– This report proves that there is no intention of the countries of the blockade to alleviate the suffering of the victims, and there is a continuation and intransigence of those countries that contribute to further deterioration of the humanitarian situation.

Recommendations of the NHRC:

– To address specialized international organizations such as the International Labor Organization, UNESCO, WTO and ICAO (International Civil Aviation Organization) to share information and promote the complaints against the countries of the blockade.

– The need to refer to the report of the Technical Mission in supporting complaints before the World Trade Organization, the International Civil Aviation Organization (ICAO) and UNESCO

– Access to the International Court of Justice, arbitration committees and national and international specialized courts

– The need to bring some of the perpetrators of defamation and hatred campaign launched against Qatar from the countries of the blockade to justice, including the Adviser to the Royal Court in KSA, who was orchestrating the media campaign against Qatar for the crimes of hostility and incitement in violation of international law and domestic laws; noting that the NHRC monitors and reports all the defamation and hatred campaigns lunched by that official and the officials of the countries of the blockade to carry out legal movements.

– Call on the national compensation claims commission to expedite the proceedings of litigation and international arbitration and depending on the report of the mission to facilitate the role of the appointed International Law Office.

The National Human Rights Committee was informed that the OHCHR shall do the following:

– Convene a meeting with the Department of Special Procedures of the Commission to hand over the cases to the UN Special Rapporteurs, each according to its competence

– Circulation of the report to all international organizations and the global alliance of national human rights institutions and discuss with them a mechanism for action at the national, regional and international levels.

– Circulate the report to all international parliaments

– Circulation of the report to the human rights mechanisms of the Organization of Islamic Cooperation, the League of Arab States and the Gulf Cooperation Council

– Follow-up on the cases with United Nations special rapporteurs, each according to its competence