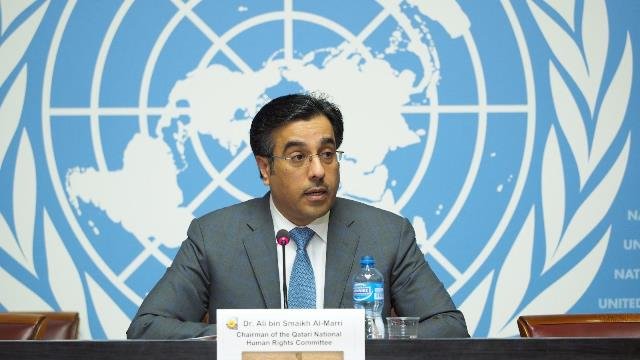 ‘We call on the State of Qatar to resort to the Security Council to determine the responsibility of the countries of the blockade on their actions which amount to the crime of aggression, economic war and collective punishment against the people of Qatar.’

Dr. Al-Marri pointed out that despite of Clause 8 of UN General Assembly Resolution No. 251/60 of 15 March 2006 on the establishment of the Human Rights Council, UNHRC resolution and urgent appeal to lift immediately the siege, reports issued by Special Rapporteurs and report of the Technical mission of the Office of the High Commissioner against human rights violations resulting from the siege, European Parliament’s reports and statements of condemnation from international organizations including Amnesty International, Human Rights Watch, Reporters Without Borders and the International Federation Reporters, no action has been taken by the siege states.

The Qatari government also called for intensive diplomatic action to seek a resolution from the UN General Assembly requesting an advisory opinion from the International Court of Justice on the illegality of arbitrary unilateral measures taken by the countries of the blockade.

Dr. Ali Marri suggested to engage Int’l Center for Medicine and Psycho-social to asses extent of damages occurred due to  human rights violations resulting from the siege, especially on separated families, right of education to students, right of freedom to practice religious rituals. right of free movement, right to freedom of opinion and expression, right of everyone to the enjoyment of the highest attainable standard of physical and mental health, etc.  He offered that National Human Rights Committee, Qatar will provide all means of legal support for this purpose.

Dr. Al-Marri said that NHRC has issued annual report on the anniversary of the siege which witnesses continuity  of violations of human rights and of victimization of the affected people.