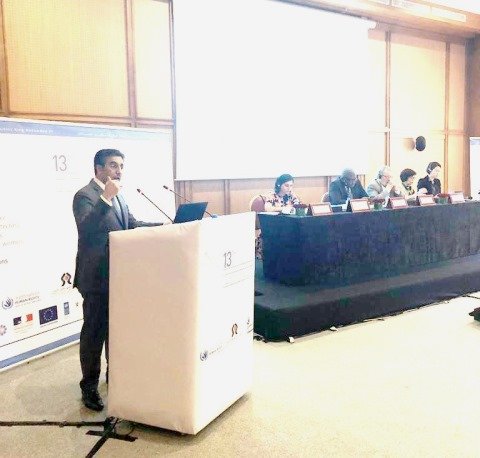 Dr Ali bin Smaikh Al Marri, Chairman of the National Human Rights Committee Qatar (NHRC) stressed that attempts by the siege countries to hack the NHRC’s website as well as to spy on the mobile phones of human rights activists and journalists in Qatar are still ongoing with aim to restrict and obstruct their work, pointing to the increasing suffering of media figures from the siege countries in Doha as their countries harassed them and threatened to withdraw their nationality in the event they continue to work in Qatar.

On the sidelines of the 13th National Human Rights Institutions Conference in Morocco, Dr. AlMarri met separately with UN Special Rapporteur on the situation of human rights defenders Michel Forst, and Ambassador Aud Marit Wiig, Special Envoy for Freedom of Religion or Belief in the Ministry of Foreign Affairs of Norway.  With his meeting with Forst, Al Marri called for conducting extensive investigations into the violations and harassment of human rights activists and journalists since the beginning of the siege on Qatar. He noted that the UN Rapporteur on the situation of human rights defenders has a legal and moral responsibility to protect this category and promote their rights, pointing out that the NHRC prepared reports documenting these violations.

Dr Al Marri called on the European mechanisms concerned with freedom of religion or belief to act promptly and investigate violations by the Saudi authorities of the right to practice Hajj and Umrah rituals by pilgrims from the State of Qatar.

Int’l Conference is being held at Marrakesh with the theme ‘Expanding the civic space and promoting and protecting human rights defenders, with a specific focus on women: The role of national human rights institutions’.

Dr. Ali Marri offered all support and cooperation for  a visit by the Special Rapporteur on the situation of human rights defenders to the State of Qatar to meet the victims of the violations by the siege countries including activists, media figures and humanitarian organizations of Qatar, he said. Through our experience with Qatar, it never prevented delegations of human rights organizations, United Nations offices, other parliamentarians and government officials from visiting Qatar. In this context, we renew the call for the siege countries to open their doors to these international organizations and delegations if they have nothing to fear, he said.

He pointed out that the restrictions were not limited to individuals only, but went beyond that to include the civil society organizations and institutions in the State of Qatar, which were classified as terrorist organizations. The relevant international mechanisms should in turn condemn the countries that make such irresponsible or legal actions for exceeding norms on the basis of which States, institutions or individuals are listed on terrorist lists, he added.

During his meeting with Ambassador Aud Marit Wiig, Al Marri said that despite the messages sent by Special Rapporteur on freedom of religion and belief regarding the the Saudi authorities’ violations of the right to practice religious rites, the Kingdom did not respond to the appeals of UN special rapporteurs and human rights mechanisms. And its responses were characterized by procrastination and political and media disinformation on the pilgrims of the State of Qatar, citing that no one from Qatar went for hajj in this year’s pilgrimage season through Hajj and Umrah, in a dangerous precedent dedicated to the crime of politicization of Hajj. He said that in this regard, NHRC has been stressing on Saudi Authorities to avoid such crime since the beginning of the Gulf crisis.

The NHRC Chairman called for urgent action by the relevant European mechanisms in this regard, and that this should have a positive impact on the benefit of the citizens and residents of Qatar who were prevented by the Saudi authorities from performing their religious rituals.

During his meeting with Houria Es-Slami, member of the Working Group on Enforced or Involuntary Disappearances of the United Nations, Dr. AlMarri  discussed with her the effects of the siege on the security and freedom of movement of citizens. He informed on the cases of forced disappearance of Qatari nationals indicate that Gulf crisis is only punishment directed at people with shared family ties, calling in this regard for rapid action and addressing the issue of detainees with Saudi Arabia to release them.