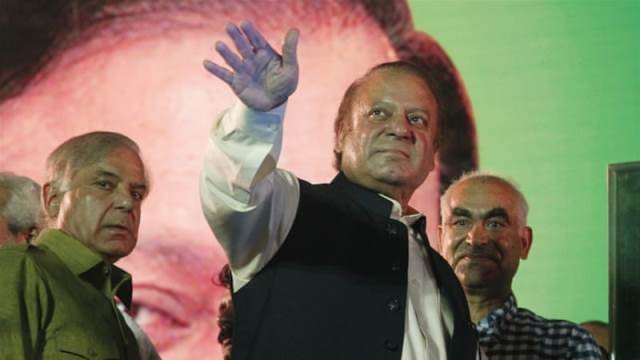 Ousted prime minister Nawaz Sharif, his daughter Maryam Nawaz and her husband retired Captain Mohammad Safdar were indicted by an accountability court in Islamabad on Thursday in connection with a reference pertaining to the Avenfield flats filed against them by the National Accountability Bureau (NAB), DawnNews reported.

All three accused pleaded not guilty to the charges. After their indictment, Maryam, Safdar and Nawaz Sharif’s pleader read out the following statement:

Sharif, who is currently in the United Kingdom, was also indicted in the Al-Azizia Steel Mills and Hill Metal Establishment references as well. His sons, Hassan and Hussain, were named co-accused in the charge sheet in the references.

The court had proceeded to indict Sharif, Maryam and Safdar after rejecting three applications filed by the trio requesting suspension of the indictment.

Since Nawaz Sharif and his lead defence counsel are abroad, the court indicted the former prime minister through pleader Zafir Khan, while the charges against Maryam and Safdar were framed in their presence.

The pleader, Zafir Khan, pleaded not guilty on Sharif’s behalf and read out a statement from him in court.

Maryam has been charged with being the beneficial owner of the London flats and Capt Safdar being her accomplice in acquiring the apartments.

The accused were unsuccessful in showing the sources of income used to purchase the London flats, reads the indictment order.

The trial in the Avenfield flats reference will start on October 26. The Securities and Exchange Commission of Pakistan’s (SECP) joint registrar, Sidra Mansoor, will record her statement as the first witness in the case.

“Injustice and atrocities cannot continue together,” she said.

She said this was the first case of its kind “in which the verdict had been announced first and the trial was being held later.”

Commenting on reports that a NAB team has gone to London to collect evidence about Sharifs’ properties, Maryam questioned how NAB could now be entrusted with the investigation when the Supreme Court had criticised the bureau for being ineffective during the Panama Papers case hearings.

“Has the JIT’s fraud been exposed or has NAB suddenly woken up?” she asked.

Without naming any institution, Maryam said if any punishment has to be announced, it should be announced once and for all to “save time of the country and nation”.

“Don’t make a mockery of the law and the Constitution … and make yourself controversial,” she said.

Maryam said her party remains united despite differences of opinion. She said the government is an institution which should be respected.

“Each institution should do its job,” she said.

After initially reserving its verdict, the court rejected an application filed by Capt Safdar’s counsel, Amjad Pervez, seeking an adjournment of the indictment proceedings.

The application submitted today argued that Volume X of the Joint Investigation Team (JIT) report, filed on the directions of the Supreme Court in the Panama Papers case, has not been provided to the defendant by the apex court.

It further argued that the statements given by three witnesses to the JIT had not been made public, hence the indictment of Maryam and Safdar should be postponed.

The NAB prosecution argued that Volume X of the JIT report had nothing to do with the indictment and urged the court to go ahead and indict the accused.

Likewise, the present lawyer from Nawaz Sharif’s legal team, Ayesha Hamid, filed an application in the accountability court seeking a delay in her client’s indictment.

The application urged the court to delay the indictment until the Supreme Court decides a petition filed by Sharif against the filing of multiple corruption references against him by NAB. The court rejected this application as well.

A third application filed by Nawaz Sharif’s counsel, seeking a merger of the three references filed against him, was also rejected.

Accountability Judge Mohammad Bashir had been set to indict Sharif, his daughter Maryam and son-in-law Capt Safdar on Oct 13. However, after a violent clash between the lawyers and police for not permitting the former into the premises of the Federal Judicial Complex (FJC), the court deferred the indictment until today.

On Oct 9, Ahmed, the counsel of Sharif and his daughter, had filed applications seeking an exemption from personal attendance for Sharif and another seeking a 15-day adjournment.

He told the court that the former premier was in London to tend to his ailing wife who was undergoing treatment for lymphoma. He said she was in critical condition and had not recovered despite a third surgery.

The court had exempted Sharif from appearing on October 9, but fixed Oct 13 for his indictment.

Talking about Maryam’s criticism of the judiciary outside the court, Rashid said, “I have never criticised the courts, not even when they gave decisions against me.”

Speaking to the reporters outside the Supreme Court. Pakistan Tehreek-i-Insaf spokesman Fawad Chaudhary said his party was satisfied with the progress of the case.

“We are happy that this case is proceeding correctly and at a swift pace. This indictment has come in just one case, there are two other cases as well.”

Referring to the other references, he said: “In the other cases one is about Capital FZE, the firm that they [Sharifs] forget to mention when they say the court gave a verdict on the iqama. The iqama was taken for this firm.”

“The current references in the accountability court are based on all the other volumes of the JIT’s investigation, not on Volume X, which still needs to be opened and then there will be more cases,” he added.

“All the money involved in these cases belongs to the people of Pakistan, and this money will be brought back to Pakistan,” Chaudhary concluded.

A five-member bench of the Supreme Court on July 28 had directed NAB to file references against Nawaz and his children in six weeks in the accountability court and directed the trial court to decide the references within six months.

The Supreme Court also assigned Justice Ijazul Ahsan a supervisory role to monitor the progress of the accountability court proceedings.