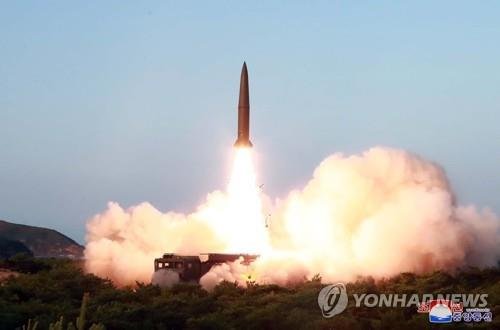 North Korea on Thursday fired two short-range missiles into the East Sea from near the eastern coastal town of Wonsan, and both flew around 600 kilometers at an altitude of around 50 km, according to an officer at the Joint Chiefs of Staff (JCS).

“Differing from a general parabolic trajectory, the Iskander shows a complicated flight pattern and what North Korea fired yesterday showed a similar one,” the officer noted.

It is the first time that the military authorities have officially offered such an assessment, though experts have said North Korea has tested its version of the Iskander, a ground-to-ground short-range ballistic missile, since May.

The two missiles were initially presumed to have flown 430 km and 690 km, respectively, but “further analysis conducted jointly with the United States showed that the missiles added the so-called pull-up maneuver in the dive phase,” the officer said.

In the reentry phase, the Iskander pulls up to fly horizontally and then dives to attack its target with a near 90-degree falling angle, which aims to avoid interception, according to experts.

This analysis is in line with a report by the North’s Korean Central News Agency (KCNA) on Friday, which said that its new tactical guided weapon system has the specific features of a “low-altitude gliding and leaping flight orbit.”

The KCNA also said that the launches gave “satisfactory verification once again to the efficiency” of the weapons system, suggesting the missile’s development has neared completion for field deployment.

“Such a gray area is due to the curvature of the Earth, and North Korea’s firing of the missiles northeastward from its east coastal region made the zone wider,” the officer said, adding that if the weapon is fired southward, South Korean assets can detect it.

Doha, 24 Sept. 2022 (QE) QatarEnergy announced that it has selected ...
END_OF_DOCUMENT_TOKEN_TO_BE_REPLACED