Multiple Blasts Killed 13 in Quetta and 10 in Parachanar 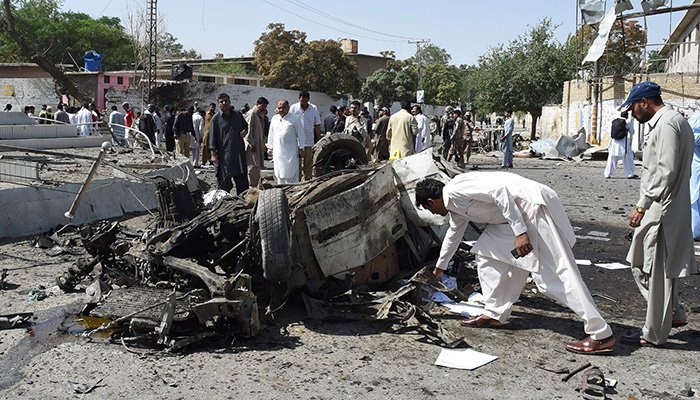 At least 10 people were killed when multiple blasts hit Parachinar, political administration of the area said, hours after blast killed 13 in Quetta.

The explosions were reported to have occurred near a densely populated area that also houses markets, Waqt News reported.

Forty people have reportedly been injured in Parachanar.

Initial reports indicated a vehicle approached the checkpost and explosives were set off when the driver of the vehicle was stopped by the police, provincial government spokesperson Anwar ul Haq Kakar told local television channel Geo News.

“At 8:45am (03:45 GMT), there was an old car, a Toyota Corolla … that came here near the [police chief’s] office and it was stopped by the police personnel. That is when the blast took place,” he said.

“There was no exchange of fire, but it’s possible that law-enforcement personnel may have fired into the air.”

Jamaat-ur-Ahrar, a faction of the Pakistan Taliban, has claimed responsibility for the attack in a statement sent out its spokesperson Asad Mansoor.

Altaf Hussain, local police official, said: “Some of the wounded are still in critical condition. Most are police personnel, as well as a traffic warden.”

“It was a suicide attack. They came to the intersection and then blew themselves up there,” said Hussain.

Al Jazeera’s Kamal Hyder, reporting from Islamabad, said the IG’s office was the likely target of the attack.

“The attack took place in the red zone, close to the IG’s office as well as the State Bank of Pakistan,” he said.

“Authorities are saying the IG’s office could’ve been the target.”