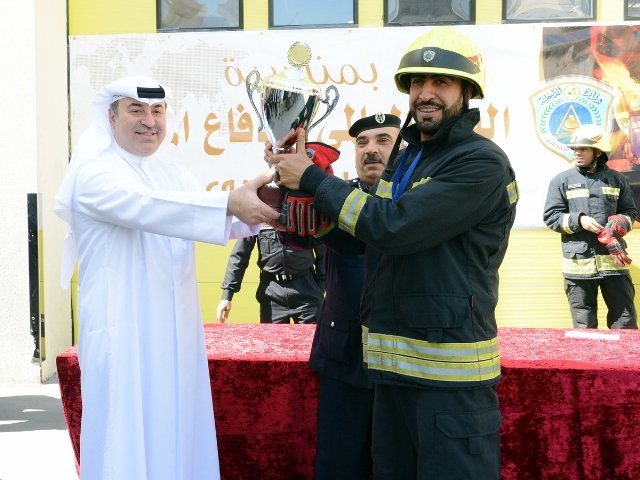 On the occasion of World Civil Defence Day being celebrated on March 1st every year, the General Directorate of Civil Defence observed the day with different programmes under the theme “Hand in hand to prevent risks” at the Officers’ Club in Civil Defence Head Quraters premises.

The event was attended by Brig. Hamad Othman Al Dohaimi, Asst. Director General of GDCD along with directors of several departments at the Ministry of Interior.

Addressing the event on behalf of Staff Brig. Abdullah Muhammad Al Sowaidi, Director General of GDCD Brig. Hamad Al Dohaimi, stated that the World civil defence day is celebrated to highlight the significant role played by the Civil Defense personnel in maintaining the security of human life from the risks that caused by humans or natural disasters. He said that this event endorses the role played by the civil defense men in the protection of life and property.

Brig. Hamad Al Dohaimi said that the awareness programs play a significant role in educating the public on safety and delivering a message of civil defence to the public and other institutions.

The Ministry of Interior Qatar represented by the General Directorate of Civil Defense joins the world with this celebration to promote cooperation and communication with various community organizations and individuals who devote great efforts in support of civil defense in spreading awareness and assuring security and safety and to emphasize the shared responsibility of everyone in order to achieve safety and protection of life and property.

A film was exhibited during the event that shed light to the security efforts carried out by civil defence personnel and some awareness programmes and activities held in order to spread the message of safety among society and educate about the safety measures to be taken to ensure security of individuals and establishments.

Later, Asst. Director General of GDCD honoured the supporting agencies from both Governmental and private sectors.

The Challenge Championship is a set of competitions of the tasks and duties performed by the firefighters and rescue personnel with much strength and physical fitness during any incidents including climbing three storey tower, raising hose, vacating tower building through stairs and running and moving mass of metal using a hammer, running for 20 meters (appx.), and use of water hose. These performances were made in full kit and in minimized time for quick and better results.

On the occasion, latest devices & equipemnts injected in Civil Defence were displayed including a 112 m in height ladder mounted on truck.