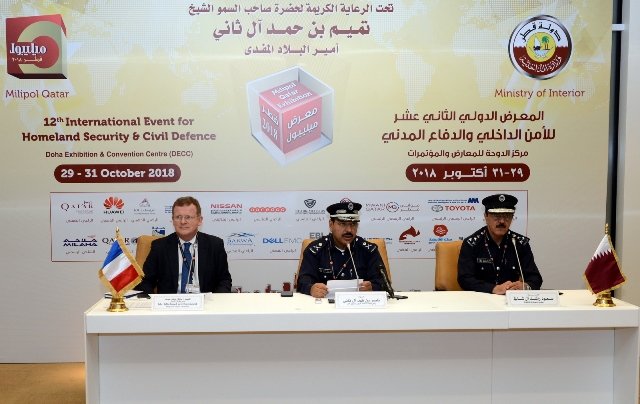 Maj. Gen. Nasser Al Thani said that, 222 exhibitors from 24 countries, including 7 new countries such as Greece, India, Latvia, Morocco, Russia, Slovenia and Switzerland participated in the 12th edition of the expo and there were 5 International Pavilions from UK, Germany, Italy, France and North America. 90 companies from Qatar took part in the exhibition, he told.

He said that 8, 487 visitors attended the exhibition in addition of number of Ministers, Deputy ministers, Police Chiefs, Undersecretaries, Commanders of Jendermaire, representatives of ministries and high ranking security chiefs from brotherly and sisterly countries attended the exhibition. He noticed that 39 % more visitors comparing to 2016 were recorded attending on a 30% more area than earlier in 11th Exhibition. He also said that around  352 reporters from different parts of the world covered the event.

Brig. Al Shafi said that the last contracts signed for the Ministry of Interior of Qatar during the expo valued about QR 48 million in the area of cyber security and also another contract worth QR 20 million riyals  with Diyar Al Sharq Al Awsat, another cyber security company.

Michael Weatherseed, Director, Milipol vents pointed out that the expo has achieved huge success according to the statistics announced by the Milipol Qatar president, compared to the statistics of Milipol 2016 edition  and the total value of the contracts worth QR 527.5 million signed during the expo is also a great evidence of the success of the expo. This year’s exhibition was excelled compared to previous years in terms of expo space, exhibitors and the countries participated for the first time.

Brig. Al Shafi announced today in a press conference the details of contracts signed for the Ministry of Interior on the third day of the expo.

The first contract worth QR 9,365,634 was signed with Ideal Solutions company for importing and fixing vehicle tracking devices and its maintenance, while the Mannai trading company bagged the contract worth QR 92,515,343 for preparing infrastructure and upgrading vocal communication systems and technical support for Cisco systems.

The third contract worth 3,152,428 was signed with Orbis systems for upgrading documents reading and iris attendance systems, while the forth contract with GET company worth QR  20,700,000 was for importing ID cards for expatriates and driving license and its components.