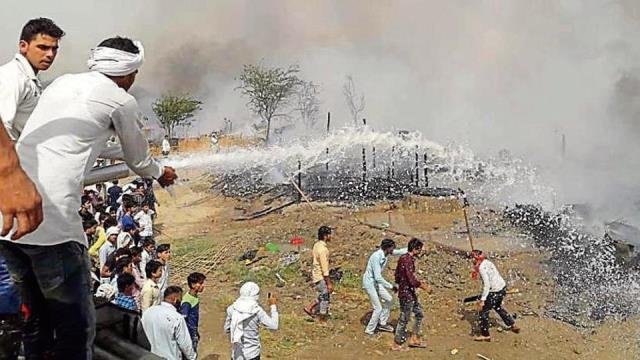 A Rohingya refugee camp in Nuh district of Haryana was gutted after a massive fire broke out on Sunday. Although no casualties have been reported so far, houses of at least 55 families were razed to the ground in the fire that started at around 3 pm.

Rohingya refugees have been living on a plot of land near Chandeni area of Ferozepur Namak village in the district since 2012. Residents say that the damage was already done by the time fire tenders reached the site.

“The incident took place around 3pm in the afternoon. Prima facie, it appears to be a case of short-circuit. Ten fire tenders were pressed into service,” SHO Nuh, inspector Sanjay Kumar said.

Residents of the camp in Nuh say that the effect of the fire was exacerbated by the heat and wind.

“Our houses have been burnt down to ashes. Nothing is left now. Everything is lost,” said Jafarullah , a resident of the camp.

Ali Johar, a Rohingya youth leader and a resident of the Kalindi Kunj camp that had earlier caught fire, said such incidents were bound to happen with the poor living conditions.

“Unless basic necessities are provided, we will continue to witness such incidents. Time and again, we have apprised the UNHCR of the poor living conditions in the camp and how the camp is susceptible to fires. So far, no concrete steps have been taken to improve the situation,” said Johar.

Expressing concern over the accident, MLA Nuh, Zakir Hussain said that immediate relief should be provided to those affected.

“The government should compensate for the loss and temporary shelter should be provided to the refugees. They should be rehabilitated as soon as it is possible since it is the month of Ramzan and they would need a space for fasting and praying. Basic food and shelter facilities should be extended to them,” said Hussain.

The Rohingya are a Muslim minority community from Myanmar. According to the UNHCR, Rohingya refugees are spread across six locations in India — Jammu, in Haryana’s Nuh district, Delhi, Hyderabad, Jaipur and Chennai.