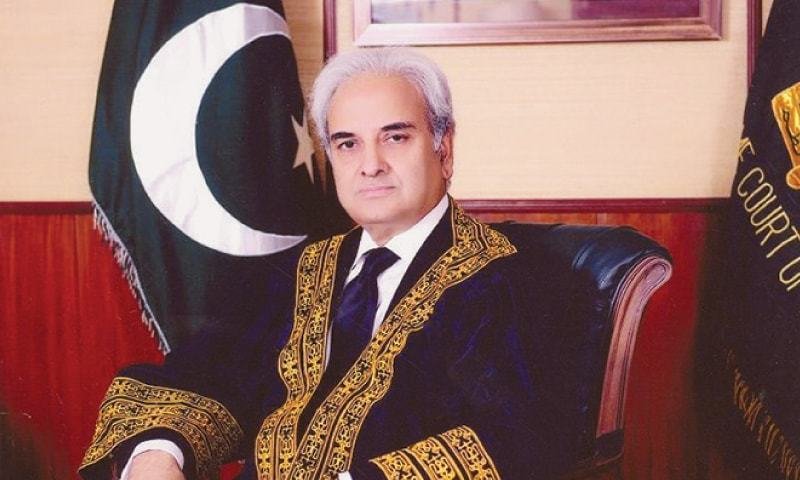 The announcement was made by Leader of the Opposition Khursheed Shah at a press conference in Islamabad following a meeting between himself and Prime Minister Shahid Khaqan Abbasi, who was also present at the press conference along with National Assembly Speaker Ayaz Sadiq.

“No one’s name was discarded,” Shah explained. “We have chosen his name on the basis of merit. We took our parties into confidence and decided upon this name.”

“We are happy that the government was able to complete its five-year term. We expect that the elections will be free and fair,” Shah said, adding that the NA speaker had played a major role in both parties reaching an agreement.

“We expect that the elections will be free and fair,” he said.

“All the names under consideration were credible,” PM Abbasi said. “Every name was discussed, and this name was decided upon. It’s a name no one can point fingers at,” he added.

Today’s announcement comes after weeks of deadlock between the PML-N and the opposition over the name of the caretaker PM. Despite a number of meetings over a period of six weeks, there appeared to be a lack of consensus between both parties, with many believing the issue would be sent to a parliamentary committee for deliberation.

Justice Nasirul Mulk was born on August 17, 1950 in Mingora, Swat. He completed his degree of Bar-at-Law from Inner Temple London and was called to the Bar in 1977.

His father, Kamran Khan, was a businessman known for his philanthropic work in Swat. The dapper Mulk is fond of playing golf and is often seen taking constitutionals in the Margalla hills.

When the now-retired Mulk took oath as the 22nd chief justice of Pakistan in 2014, members of the legal fraternity said the appointment would bring honour, dignity and quiet grace.

Why quiet grace? Because, they say, Justice Mulk seldom interjects court proceedings with questions to the counsel unless necessary. A judge who never loses his temper, he extends equal opportunity to the lawyers, but is firm about not allowing the contesting sides to get sidetracked by entering the political arena.

“He is a good administrator and a disciplined judge who knows how to manage courts,” Advocate Hafiz S.A. Rehman commented at the time.

“He was a teacher who had complete command of his subject and avoided controversies,” recalled a former student of Justice Mulk in the Khyber Law College of Peshawar University. “He always came into the classroom well prepared.”

He has also delivered lecturers in Khyber Law College, Peshawar and Peshawar University besides delivering lectures as a guest speaker at the N.W.F.P. Provincial Services Academy, Peshawar.

He is remembered for the way he conducted a contempt case against then prime minister Yousuf Raza Gilani.

He convicted the then Chief Executive for 30 seconds while maintaining the dignity and honour of the court, and left the disqualification issue open to the Election Commission of Pakistan and the then speaker of the National Assembly, Dr Fehmida Mirza.

Justice Mulk is one of the seven judges who signed a restraining order on Nov 3, 2007, when retired Gen Pervez Musharraf imposed emergency and forcibly sent the judges home.

Justice Mulk later joined the judiciary on Sept 20, 2008, under the Naek formula when he took a fresh oath as a judge of the Supreme Court with his seniority intact.

Justice Mulk dissented from a majority judgement while deciding an appeal filed by Mukhtaran Mai for the enhancement of the sentence of her rapists and against their acquittal.

He partially accepted Mukhtaran Mai’s appeal by setting aside the high court’s verdict of the acquittal of the accused on April 21, 2011.

While hearing missing persons’ cases, Justice Mulk has always stood firm as a result of which a number of disappeared persons have surfaced.

Justice Mulk resigned from the post of the acting Chief Election Commissioner the day he was designated as the next Chief Justice.