Las Vegas Shooting : Stephen Paddock Girlfriend Led Away by FBI on Return to US 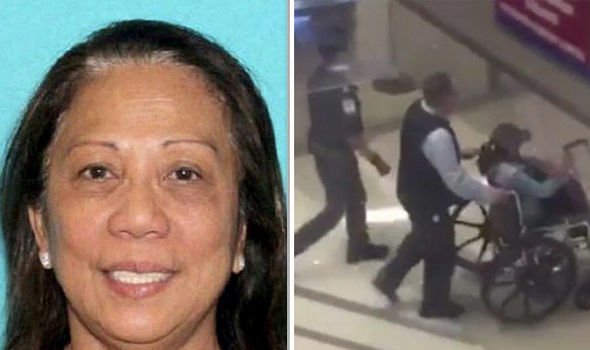 Law enforcement are hoping to obtain answers from Ms Danley, who Clark County Sheriff Joseph Lombardo said was a “person of interest” in the investigation.

On Tuesday morning, Ms Danley, 62, arrived back on US soil and was escorted out of the airport in a wheelchair.

Ms Danley was in the Philippines during the massacre but flown back to the US to be questioned by the FBI as part of the investigation.

Speaking yesterday, Sheriff Lombard said: “We are in conversations with her”

Her return may help shed light on what led the mass murderer to unleash chaos from the 32nd floor of the Mandalay Hotel, firing down on the Route 91 Harvest country music festival.

More than 500 people were injured as the shooter fired bursts from a semiautomatic weapon which had been adapted to fire fully automatic rounds.

It comes as more details on the 64-year-old gunman are revealed following his campaign of slaughter.

A law enforcement official has confirmed Paddock sent £75,500 ($100,000) to the Philippines before Sunday’s terrifying attack.

However, officials currently don’t know the recipient and the FBI are working with authorities in the Philippines to determine additional details.

But it is alleged the money was sent to the gunman’s girlfriend.

Paddock’s 62-year-old partner Marilou Danley travelled to Hong Kong on September 25 and then went on to the Philippines on October 1 as he opened fire on thousands of people.

Investigators say it is believed she was there to visit family, although this has not been confirmed.

Police say the pair lived together near Vegas.

20 January 2022 By Ashraf Siddiqui More than 7,000 books of different ...
END_OF_DOCUMENT_TOKEN_TO_BE_REPLACED