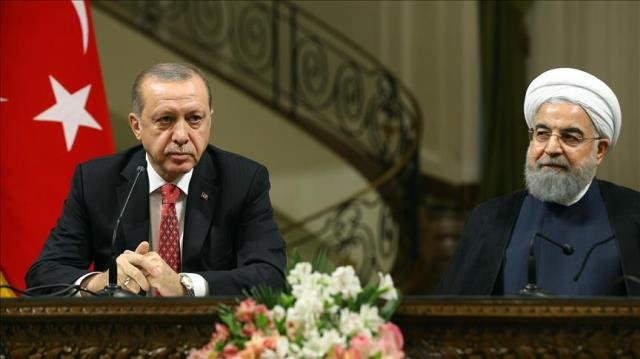 Speaking at a joint news conference with his Iranian counterpart Hassan Rouhani in capital Tehran, Erdogan said: “What is the referendum organized by northern Iraq’s regional administration for? No country in the world apart from Israel recognizes it.

“A decision made at the table with Mossad is not legitimate, it is illegitimate.”

On Sept. 25, Iraqis in Kurdish Regional Government (KRG)-held areas — and in several areas disputed between Baghdad and Erbil — voted on whether to declare independence from Iraq.

According to results announced by the KRG, almost 93 percent of registered voters cast ballots in favor of independence.

The illegal referendum continues to face sharp opposition from most regional and international actors, many of whom warn that the poll would distract frm Iraq’s ongoing fight against terrorism and further destabilize the already-volatile region.

The Turkish president said Iraq was the primary topic of discussion during his meeting with Rouhani.

“We have stated that Turkey does not recognize the northern Iraq regional administration’s illegitimate referendum.

“I believe that northern Iraq’s local administration will be condemned to isolation by siding with a certain figure on one end and another figure on the other, and then taking action with those certain figures.”

He reiterated Turkey’s position that it would continue to engage with the central government in Baghdad.

“Turkey and Iran’s determination on the matter is evident. Turkey will only engage with the central government in Iraq and we certainly term this referendum as illegitimate,” he said.

“As you know, there are steps we, both Turkey and Iran, have taken on the matter. But there are more severe steps we will take in the upcoming period.”

Rouhani saw the poll in northern Iraq as an attempt by “some foreigners” to create sectarian and ethnic strife.

“Some foreigners plan to split the area to increase ethnic and sectarian discrimination. Both countries do not accept such acts of discrimination,” he said.

“Whatever name they give to it, we will fight against terrorism. The terrorists should know that we will not allow their brutal acts.”

About efforts to resolve the conflict in Syria, Erdogan said: “There is a process framed for Syria through [talks in Kazakh capital] Astana together with Iran, Russia and Turkey. Here we strongly emphasize on the de-conflict zone.

The Astana talks are being brokered by Turkey, which backs the Syrian opposition, along with Russia and Iran, both of which support the Assad regime.

The three guarantor states, as well as representatives of the Damascus-based Bashra al-Assad regime and some opposition factions, met in Astana in September for a sixth round of talks aimed at ending the six-year conflict.

Rouhani said political, regional, and global ties between Iran and Turkey were developing with each passing day.

“We made very important decisions, both during our one-on-one meeting with Turkey’s distinguished president and at the 4th High Level Cooperation Council meeting on economic development between the two countries,” the Iranian president said.

“One of the most important decisions made was using the national currency in commerce for developing banking relations between the two countries. The decisions will be finalized next week.”

Erdogan added: “We have decided to improve the financial sector through chairmanship of our countries’ central banks and cooperation between our banks. In efforts to rescue our economic relations from currency rate pressure, we have decided to conduct investments through own currencies [Turkish Lira and Iranian Rial].”

The two leaders also said the goal is to increase the trade volume between the two countries up to $30 billion, which is currently “stuck” at $10 billion. “We have encouraged our colleagues for intense efforts in the fields of energy to tourism, from transportation to defense industry,” Erdogan said.

In an effort to boost tourism and commerce between the countries, Rouhani said the leaders also decided to open three customs borders for 24 hours to ease travel and accelerate transit of goods.

“Two customs gates will be open for 24 hours starting from tomorrow. The third gate will be open at the soonest since it is closed due to construction and some technicalities.”

Khamenei termed the illegitimate referendum in northern Iraq as a threat to the future of the region, according to Iranian news agency IRNA.

“The referendum is an act of betrayal towards the entire region and poses threat to its future,” the Iranian leader said during the meeting with Erdogan.

The religious leader emphasized the importance of Turkey-Iran cooperation, saying that both states must take necessary measures against the vote.

“The U.S. always wants to hold a trump card against Turkey and Iran. For this reason, the U.S. and Europeans cannot be trusted in any way,” Khamenei said.

Erdogan was given a red-carpet welcome upon his arrival in Tehran Wednesday.

The president and his delegation left for home later in the evening.