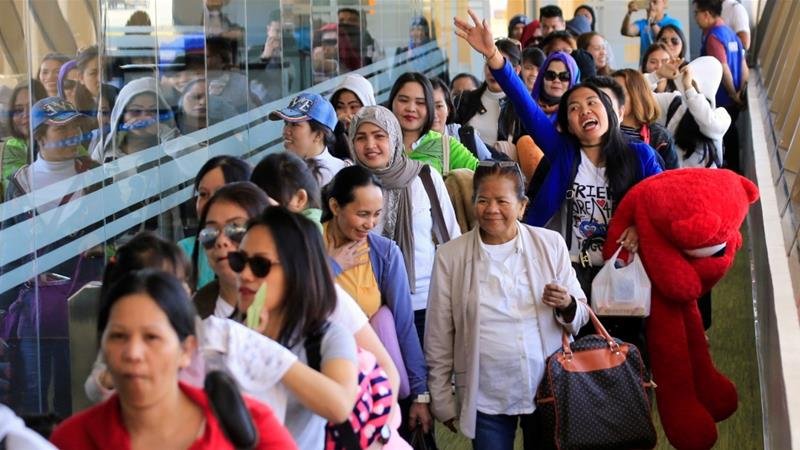 Kuwait has ordered the ambassador of the Philippines to leave the country within a week and recalled its envoy to Manila for consultations, according to the official news agency KUNA.

KUNA quoted the Kuwaiti foreign ministry as saying that the action against Ambassador Renato Villa was in retaliation for “undiplomatic acts by Philippine embassy staff, encouraging Filipino domestic workers” to escape employers’ households.

The ministry said it had given the envoy three days to provide the names of the Filipino residents of Kuwait who had “kidnapped” domestic workers from their employers’ homes, adding it had yet to receive a response from the embassy.

It also said it had declared Villa “persona non grata”.

On Tuesday, the Philippines apologised for what Kuwait viewed as a “flagrant” violation of its sovereignty. Philippine Foreign Secretary Alan Peter Cayetano said the embassy had to “assist” Filipino workers who sought help as some situations were a matter of life and death.

“We respect Kuwaiti sovereignty and laws, but the welfare of Filipino workers is also very important,” Cayetano told reporters, adding that domestic helpers account for over 65 percent of the more than 260,000 Filipinos in Kuwait.

The murder of Joanna Demafelis

In February, Philippine President Rodrigo Duterte ordered a ban on the further deployment of Filipino workers to Kuwait over reports of abuse following the discovery of a domestic worker’s body in a freezer in an abandoned home.

Joanna Demafelis went missing in September 2016, and her body was found on February 6 in a freezer in an abandoned apartment in Kuwait City, where it had reportedly been kept for more than a year.

Her Lebanese and Syrian employers were given death sentences in absentia.

‘Not a clandestine operation’

In Saturday’s operation – which was caught on video and shared online – the domestic workers were taken to shelters run by the embassy from where they would soon be repatriated, diplomats in Manila said, according to Reuters news agency.

“The workers voluntarily went with embassy staff who waited outside the homes of the domestic helpers’ employers,” said a diplomat. The employers did not hand over their passports.

Some workers were persuaded to leave their employers, the diplomat added.

“It was not a clandestine operation,” said Elmer Cato, Philippine assistant secretary for public diplomacy.

This diplomatic crisis between the two countries prompted Kuwaiti MPs to demand the expulsion of Manila’s envoy.

“Expelling the ambassador of the Philippines is a correct measure that should have been taken when the Philippines president first started his threats,” MP Shuaib al-Muwaizri wrote on Twitter.

“The Ministry of Foreign Affairs should not accept any offers made by the Philippines president or his foreign affairs secretary.”

The Philippines called Kuwait’s decision “deeply disturbing,” saying it “reneged” on an earlier agreement to work together.