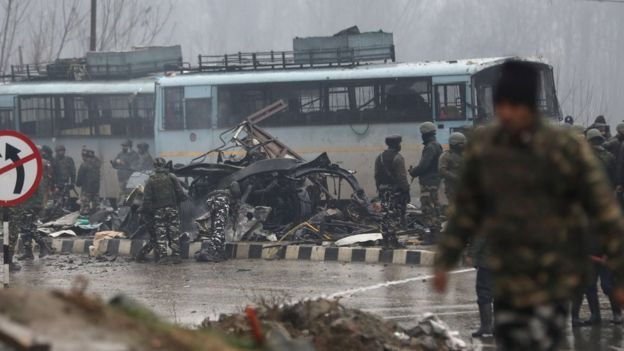 At least 40 Indian paramilitary police have been killed in a bomb attack by militants on their convoy in Indian-administered Kashmir. Police told the BBC that a car filled with explosives had rammed a bus carrying the troops to Srinagar.

Pakistan-based Islamist group Jaish-e-Mohammad said it was behind the attack. It is the deadliest militant attack on Indian forces in Kashmir since the insurgency against Indian rule began in 1989.

India has called for international sanctions against Jaish-e-Mohammad’s leader, Masood Azhar. Pakistan said the attack was a matter of “grave concern” but rejected suggestions that it was responsible for it.

Both India and Pakistan claim all of Muslim-majority Kashmir but only control parts of it.

The blast took place on the heavily guarded Srinagar-Jammu highway about 20km (12 miles) from the main city in Indian-administered Kashmir, Srinagar.

“A car overtook the convoy and rammed into a bus with 44 personnel on board,” a senior police official told BBC Urdu’s Riyaz Masroor. The official said the death toll might increase because dozens were “critically injured”.

The highway had previously been closed for a week because of snow, reports said. AFP news agency said Jaish-e Mohammad had told local media it had carried out a suicide bombing.

What has the reaction been?

Indian Prime Minister Narendra Modi has strongly condemned the attack. Home Minister Rajnath Singh said Jaish-e-Mohammad was “Pakistan-based and Pakistan-backed” while Finance Minister Arun Jaitley said those responsible would be given an “unforgettable lesson for their heinous act”.

However in a statement the Pakistani government said it strongly rejected “any insinuation by elements in the Indian media and government that seek to link the attack to Pakistan without investigations”.

The US, the UN Secretary General and many other countries have condemned the attack. Two former Indian chief ministers of the state, Omar Abdullah and Mehbooba Mufti, tweeted about it.

20 January 2022 By Ashraf Siddiqui More than 7,000 books of different ...
END_OF_DOCUMENT_TOKEN_TO_BE_REPLACED