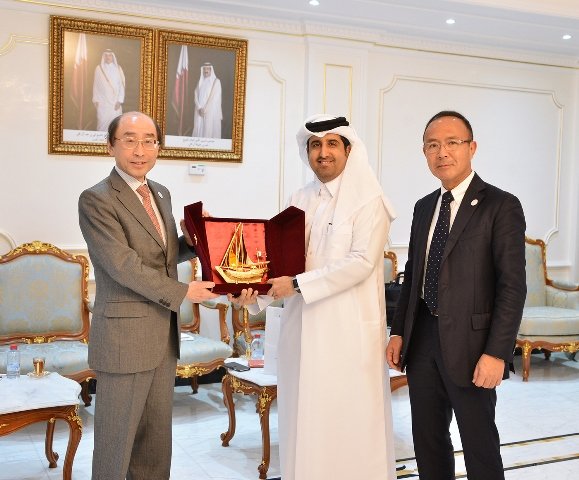 Saleh bin Hamad Al Sharqi, Director General, Qatar Chamber of Commerce met on Tuesday with Shigeru Endoa,  Special envoy of the Ministry of Foreign Affairs of Japan for EXPO 2025. He was accompanied with private sector special envoy Masaki Iwakura and Daisuke Yamamoto, Consultant at the Japanese embassy to Qatar .

During meeting, both sides reviewed mechanisms of enhancing  cooperation between private sector in both countries. Shigeru Endoa briefed Qatari side on the Japanese ongoing preparations in Osaka, host city of the Expo 2025. He hoped to get Qatar’s support for Osaka’s bid to host this global exposition.

He told that Japan is competing with three other cities for the bid to organise the 2025 World Expo: Yekaterinburg, Russia; and Baku, Azerbaijan.

He said 170 delegates representing member countries of the International Exhibitions Bureau (BIE) will elect the host country of the 2025 World Expo in November this year.

The expo would be an opportunity for Qatari companies and businessmen to build robust relations with the Japanese side and establish joint ventures and businesses in all sector, particularly in Osaka which is a leading business center in the country.

Saleh Al Sharqi, QCC Director General said that State of Qatar is very keen in participating at international forums. “Qatar had participated in Expo Astana 2017 in Kazakhstan and its pavilion won the first place and Gold Award among more than 100 pavilions of different participating countries.,” he told.

In preparation for hosting the 2022 World Cup, Qatar is implementing mega projects which opens the way for Japanese companies to participate, he pointed out.

In turn,  Masaki Iwakura said that the expo is a good opportunity for Qatar and Japan to promote their economic and trade ties.

Held under the theme”Designing Future Society for Our Lives”, he said, the expo focuses on how to lead a healthy life in a diverse manner, as well as it highlights the United Nations’ Sustainable Development Goals.

20 January 2022 By Ashraf Siddiqui More than 7,000 books of different ...
END_OF_DOCUMENT_TOKEN_TO_BE_REPLACED