Islamophobia Should be Seen as ‘Crime Against Humanity’, Summit Issued Declaration 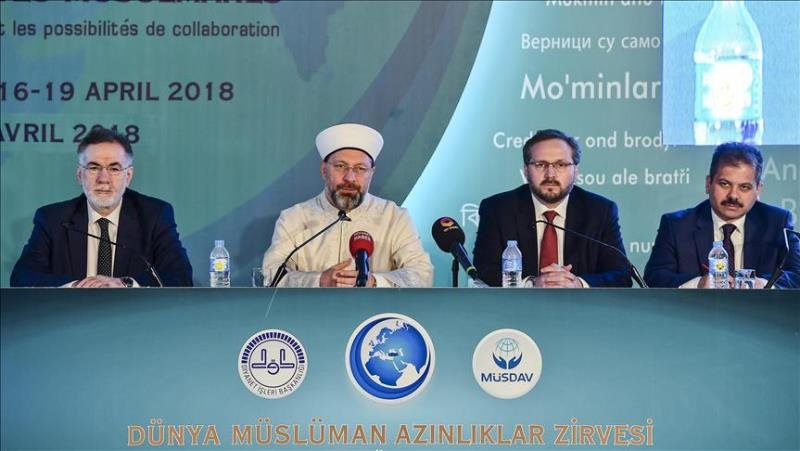 Organized with the aim of discussing the main problems of Muslim minorities and their solutions, a four-day summit on Muslim minorities ended in Istanbul on Thursday with a declaration saying Islamophobic activities should be declared a crime against humanity.

Organized by Turkey’s Directorate of Religious Affairs, the summit saw the participation of Muslim academics, activists, journalists and writers who could facilitate the revival of the relationship between Turkey and minority Muslim communities living in different countries.

During the summit, the participants also discussed boosting the existing cooperation in religious education and services.

A final declaration closing the four-day summit said any minority’s exposition to discrimination due to its nation, gender, color, culture, religion, or language is a crime against humanity.

Islamophobia was described as a “human rights problem” steeped in self-interest and racism.

It said those who want to make Islamophobia a part of the current political discourse aim to profit from an environment of quarrels, frictions and clashes that they have created among cultures, communities, religions, and civilizations.

Stressing that the aim of Islamophobia is planting hostility among people and communities of different beliefs, the declaration said: “Thus, it is necessary that Islamophobic activities should be considered as crimes against humanity.”

Calling the endeavor to recognize Jerusalem as the capital of an occupying community “a futile effort”, the declaration strongly condemned and rejected this “reckless attitude”, which will further curtail peace and fuel the ongoing conflict.

“For all the Muslims, Jerusalem is the capital of Palestine and it will remain as such forever”, it added.

On Dec. 6, US President Donald Trump recognized Jerusalem as Israel’s capital, drawing widespread condemnation from across the region and angry protests in the Palestinian territories.

Jerusalem remains at the heart of the Middle East conflict, with Palestinians hoping that East Jerusalem — occupied by Israel since 1967 — might eventually serve as the capital of a Palestinian state.

FETO tries to carry out its “treacherous activities” under the guise of religious service with support from dark global powers, it added.

Calling FETO a “global threat and calamity”, the declaration said it was essential that all Muslims cooperate consciously and selflessly against this terror group.

Ankara also accuses FETO of being behind a long-running campaign to overthrow the state through the infiltration of Turkish institutions, particularly the military, police, and judiciary.

“These puppet terror groups ruin cities and destroy the historical, cultural, aesthetic and architectural legacy of the Islamic civilization,” it was noted, adding that these terror groups murdered other Muslims all the time. “They bring nothing but blood and tears to Islamic lands.”

It was said that such terror groups brainwashed the youth in migrant and minority communities into becoming mere instruments of their malicious aims.

It also said the Muslim cooperation is “vital duty” to prevent the young from terror groups.

“It is a vital responsibility incumbent on all Muslims to work in cooperation” so that these vulnerable Muslim youth will not perish at the hands of terror groups, which are nothing but “subcontractors”.

The declaration concluded with the announcement that the International Foundation for Solidarity with Muslim Communities (MUSDAV) was founded by Turkey’s Directorate of Religious Affairs in the capital Ankara to work on all of the problem areas highlighted.