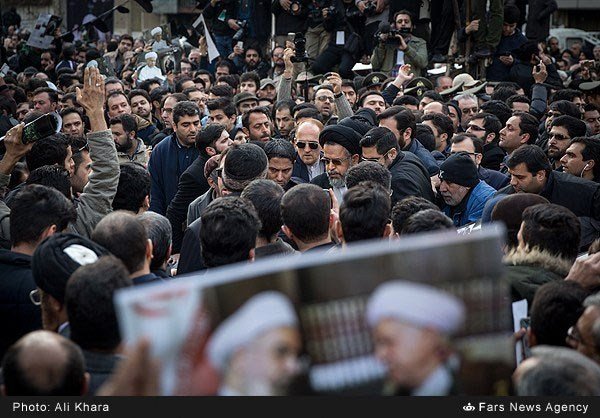 Rafsanjani died at the age of 83 in Tehran on Sunday after he was rushed to the Tajreesh Martyrs Hospital in Northern Tehran after experiencing a cardiac arrest Sunday afternoon.

Earlier on Tuesday, Ayatollah Khamenei led the funeral prayers for the burial of Hashemi Rafsanjani.

A large number of Iranian people from all walks of life as well as high-ranking officials, including the president, parliament speaker and Judiciary Chief Ayatollah Sadeq Amoli Larijani, participated in the funeral procession held at the University of Tehran’s campus.

“Ayatollah Hashemi Rafsanjani suffered a cardiac arrest at around 18:00 today and was immediately rushed to a Tehran hospital where a team of heart specialists tried hard to resuscitate him for one and a half hours, but unfortunately to no avail,” Deputy Health Minister Mohammad Haji Aghajani said on Sunday.

“He died at 19:30 this afternoon,” the deputy minister declared.

The body of the influential politician and official who had served in a range of top posts ever since the Islamic Revolution was returned from the hospital to his home in the vicinity of Hosseiniyeh Jamaran – the home to the Late Founder of the Islamic Republic Imam Khomeini – in Shemiran in Northern Tehran on Sunday and was later transferred to Hosseiniyeh Jamaran, where a host of Iranian officials were present to show their respect for the veteran politician. Then on Tuesday, his body was transferred to the Tehran University Campus and was given a procession in the streets of Central Tehran.

The Iranian government has declared three days of mourning.

Akbar Hashemi Rafsanjani or Hashemi Bahramani was born in Southern Iran on 25 August, 1934 and was an influential Iranian politician and writer, who was the fourth president of Iran.

Hashemi Rafsanjani also served as chairman of Iran’s Experts Assembly that is tasked with choosing the country’s Leader.

He was also head of Iran’s Expediency Council ever since 1987.

Hashemi Rafsanjani married Effat Marashi, a housewife, in 1958. The couple have three sons and two daughters. His second son, Mehdi who went on trial and was convicted to 10 years of imprisonment for corruption charges, has been released from prison in the evening to attend his father’s funeral ceremony.