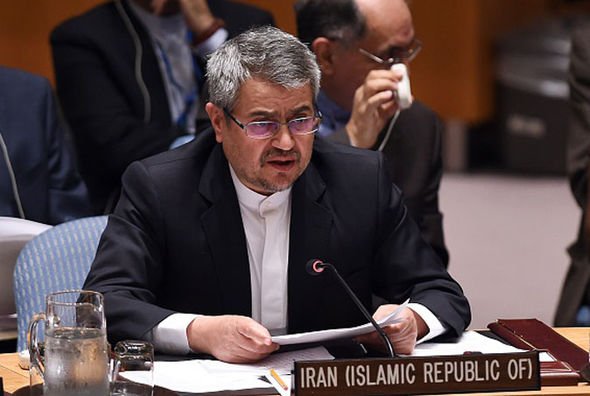 Head of Iran’s mission to the UN Gholamali Khoshroo in the letter highlighted ‘the most recent and wide-ranging attempts by the US to intervene in the domestic affairs of the Islamic Republic of Iran’.

“In the past several days, the US administration, led by the US President, has stepped up its acts of intervention in a grotesque way in Iran’s internal affairs under the pretext of providing support for sporadic protests, which in several instances were hijacked by infiltrators to include acts of senseless homicide, including the murder of a 12-year-old boy and his father, blind violence and rampant destruction,’ Khoshroo said.

He said that “the President and Vice-President of the United States, in their numerous absurd tweets, incited Iranians to engage in disruptive acts. The US Department of State went so far as admitting that the US Government wants to encourage protestors in Iran to change their Government, admitting that the US is engaged in interfering with the internal affairs of Iran through Facebook and Twitter’.

‘The current US administration, despite its recent empty statements, has continuously insulted the great Iranian nation and displayed open hostility towards Iranian people, including itner-alia by banning ordinary Iranian citizens from entering the United States,’ Khoshroo added.

Khoshroo went on to remind the US ‘unlawful sanctions’ against Iran that are in violation of the nuclear deal it signed in 2015.

The nuclear deal was signed by Iran and the five permanent members of the United Nations Security Council, including the US, plus Germany. Under the deal, known as the Joint Comprehensive Plan of Action (JCPOA), Iran accepted to curb its nuclear activities in exchange for economic sanctions relief.

The Iranian envoy also accused the US of ‘taking every possible devious measure to prevent Iranian people from enjoying the economic dividends of US sanction-lifting obligations’ under the JCPOA.

“As in all other democracies, the Government of the Islamic Republic of Iran is determined to protect this right as well as the safety and security of its citizens against acts of violence and destruction,” he said.

Khoshroo called on all member-states to condemn the interventionist acts of the US and urge it to remain committed to the international law and the United Nations Charter.

Doha, 25 June 2022 THE Embassy of Nepal and the Non-Resident ...
END_OF_DOCUMENT_TOKEN_TO_BE_REPLACED