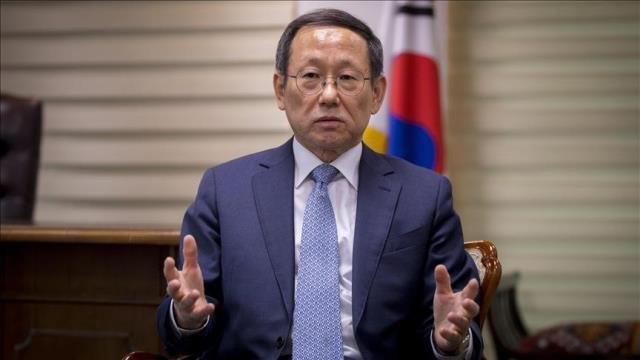 At the top of President Recep Tayyip Erdogan’s agenda during his upcoming visit to South Korea on May 2-3 will be investments and cooperation in the defense industry, Korean ambassador to Turkey Choi Hong-ghi said.

“We have great expectations for the visit. Relations between both countries are already at a good level but we want to get tangible results from the visit,” Choi told Anadolu Agency.

Choi stated that one-to-one meetings between Erdogan and representatives of big Korean firms were expected to be held.

“I think that this visit will be very useful to boost investments. Turkish investors who accompany the president will also gather with Korean business people and we hope to see cooperation between them,” Choi said.

“I think Yildirim meant not only increasing trade volume between the two countries but also improving economic cooperation.”

Choi underlined that the volume has risen consistently since the Trade in Goods (TiG) Agreement, which aims to gradually eliminate tariffs on goods, became operational under the scope of Free Trade Agreement (FTA) between South Korea and Turkey.

“The Framework Agreement Establishing Free Trade Area between the Republic of Turkey and Republic of Korea” was signed in August 2012 and entered into force in May 2013.

Highlighting that reaching this target can be managed by the private sector, Choi said governments’ role was to provide an investment-friendly environment for business.

Choi added that agreements regarding investments and trade in services under the scope of FTA were signed but still waiting for approval of the Turkish parliament.

“The agreement was approved by the Korean parliament. The ball in in Turkey’s court now. I hope after those agreements enter into force,” he said.

The agreement on trade in services and investment were signed during Turkish Economy Minister Nihat Zeybekci’s visit to South Korea in February 2015.

Praising Turkey and South Korea’s “high potential” with a total population of 130 million people, the ambassador said current figures fell short of the potential and were not satisfying.

“As Prime Minister Yildirim mentioned, we want to double this [trade volume] a lot,” Hong-Ghi said.

Over a decade, the trade volume between Turkey and South Korea surged nearly 60 percent to reach $7.2 billion in 2017 according to the Turkish Statistical Institute.

The number of South Korean companies operating in Turkey stood at 312 by the end of 2017 while it was 134 in 2007, according to data from Turkish Economy Ministry.

Choi cited that Korean companies had shown great interest in projects in the fields of energy and transportation as part of Turkey’s vision for 2023.

“We want more Korean companies to invest in those fields in Turkey,” he said.

The ambassador said that South Korea worked closely with Turkey regarding technology transfer in the defense industry and high-speed train production.

“The high-speed train project, the Izmir Gulf Transit Project and the Three-Level Grand Istanbul Tunnel Project are the projects that attract Korean firms the most under the scope of Vision 2023,” he said.