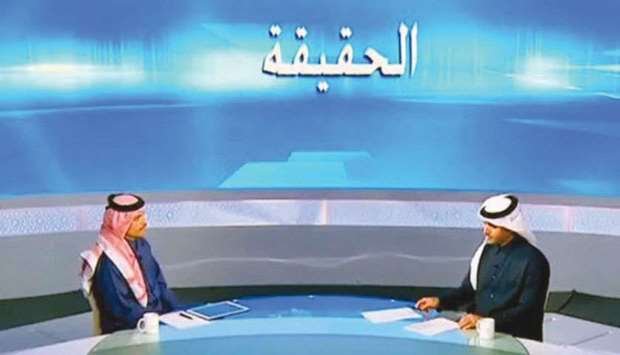 Sheikh Mohammed bin Abdulrahman Al Thani, Deputy Prime Minister and Foreign Minister of State of Qatar has said that the accusation by the siege countries that the State of Qatar gave the Houthis data about the entry of UAE, Saudi and Bahraini soldiers to Marib province in Yemen, he questioned where these charges against Qatar have been when Doha was participating in the coalition and on the same side of the table with them, whether when decisions were made at the Human Rights Council, in defending the coalition at the Human Rights Council, or in adopting the Security Council resolution on which the coalition and other acts in which the State of Qatar participated with other coalition members were established.

These accusations surfaced after the hacking crime in order to justify and promote for their people the unfair actions against the State of Qatar, and “this is the only justification that we see.”

He said that the U.S. Secretary of State visited Qatar and then Saudi Arabia and met with the siege countries, and then returned to Doha with a proposal of principles and a roadmap and asked for a response to this proposal within five days, and also mentioned that the Saudi Crown Prince told him that they do not mind a dialogue, but the State of Qatar should issue a statement in a specific format that it is ready to negotiate.

“We agreed and he gave me the wording of the proposal and it was an acceptable format. We issued it in a statement after the departure of the U.S. Secretary of State. Saudi Arabia was supposed to issue a similar statement to welcome this. The Qatari statement was issued and no Saudi welcoming statement followed but rather a negative one in response to the Qatari statement.

“Subsequently, we ignored this stage and responded to the roadmap and the list of principles after the five days mentioned by the U.S. Secretary of State and nearly 90 percent of them were acceptable whether the roadmap or the principles because they were rational and do not affect the sovereignty of any state and are binding for all, and so was the roadmap. After that, we asked about the measures that should follow. The American response was that the siege countries did not respond and therefore the matter stalled at that time,” Qatar’s Deputy Prime Minister and Foreign Minister said.

As for the ministerial meeting that preceded the recent GCC summit in Kuwait, he said that the State of Qatar was informed by Kuwaiti First Deputy Prime Minister and Foreign Minister that the State of Kuwait had received an acceptance from Saudi Arabia that the summit were to be held in their presence, adding that and the attendance of Saudi Arabia, the UAE and Bahrain was confirmed. “We also welcomed the participation and that Emir of State of Qatar welcomes attending the summit as long as it would be held and that it would be an opportunity to discuss the issue” and be the first direct discussion at the dialogue table in a civilized way.

He added that he went to the ministerial meeting and Sheikh Sabah Khaled Al-Hamad Al-Sabah asked him not to raise the issue of the Gulf crisis in the meeting as it would be discussed at the level of the leaders the next day. “We respected the Kuwaiti request but asked that the final declaration included welcoming the Kuwaiti efforts to mediate just as a reference to the crisis, and that what follows would depend on the outcome of the discussion of the leaders at the summit.”

Sheikh Mohammed bin Abdulrahman Al-Thani added that the next morning before Emir of Qatar left Doha, “we were told that Saudi Arabia, the UAE and Bahrain would reduce the level of representation and that they would not participate at the level of the leaders.”

He said whereas, Emir of Qatar had already decided that he would attend the summit and not reject the invitation of Emir of Kuwait Sheikh Sabah Al-Ahmad Al-Jaber Al-Sabah. Emir of Qatar had expected it to be an opportunity to meet with them, “but we were surprised by this rough approach in dealing with the GCC and not respecting the Kuwaiti mediation or the Gulf system,” Qatari top diplomat said previously, no matter what the differences were, the summit still took place at the level of leaders or at least the crown princes, but this time was “a precedent to be represented at this level with all respect for the people who represented those countries, but it was not up to the level that there would be a dialogue between them. And the Gulf crisis was not fully addressed.”

The Emir of Kuwait addressed the routine matters of the meeting and “we in the State of Qatar see it as an appreciated step by the Emir of Kuwait that he is still trying to save this council by continuing its regular work at least until there is a chance to overcome these differences,” Qatar’s Deputy Prime minister and Foreign Minister said.

On the dispute settlement committee that was put forward during the summit, he said that there is an item in the GCC Charter and another in the Riyadh Agreement on discussing and resolving any dispute, adding that the two items were not respected in this dispute.

Sheikh Mohammed bin Abdulrahman Al-Thani said that the current situation is the result of the siege countries’ lack of respect for these two items, but what the Emir of Kuwait put forward is a reasonable request to all the Gulf States to protect their security and stability that they are not subjected to such unilateral sanctions in which there are clear violations of international law that have been condemned in the past by many international organizations, whether the U.N. general Assembly when it condemned the unilateral actions against Cuba or Ecuador, or condemning the ban on the export of oil. He noted that all organizations condemn this act and today it took place under a system like the GCC, and, hence, Kuwait wants to have a clear mechanism for resolving disputes so that conflicts would not reach such a level.

As for the extent to which the crisis might reach and its impact on the GCC countries if it becomes a long-term one, he said that there is a clear attempt after increasing the international pressure on the siege countries to normalize the crisis and there are many statements that the crisis of Qatar has been overcome or that the State of Qatar no longer represents anything, in addition to childish actions such as not mentioning Qatar in news or in matches, or that Qatar’s problem is very, very small.

“If the problem of Qatar was very, very small, according to their words, why do they keep mentioning the name of Qatar and incite against it? Their media carries charges against Qatar every day, in addition to holding conferences on Qatar. So, where is the fault while all this incitement continues and where is the fault while you still incite against the State of Qatar in Western countries? The job of our ambassadors is to develop our relations with the countries that they are sent to, while the job of the ambassadors of the siege countries now is to demonize the relations of the State of Qatar with the countries that they are sent to,” Qatar’s Deputy Prime Minister and Foreign Minister said.

Sheikh Mohammed bin Abdulrahman Al-Thani added that the issue of normalizing the crisis is unrealistic and the siege countries are not honest about it. “But if we look from a humanitarian perspective that unilateral actions against the Qatari people are normalized, then it is unacceptable,” he said, adding that depriving a Qatari citizen of his family is racial discrimination and unacceptable in the 21st century.

“To reject someone because of their nationality or race, and to normalize a crisis by denying a Qatari investor access to their investments and press them politically to lose their money because you want to put political pressure on their country is unacceptable.

“To go to countries and offer them money to break ties with Qatar or shut their airway in front of the State of Qatar is unacceptable. These actions show that they do not actually normalize the crisis. They want to normalize the crisis only in the media through statements and this is a clear contradiction,” he said.

Sheikh Mohammed bin Abdulrahman Al-Thani cited a statement by the Emir Sheikh Tamim bin Hamad Al-Thani that the State of Qatar is fine without them, adding that “our main concern is how to not have any impact on our people from this crisis, and the state is continuing its development measures.”

In response to a statement by an official of the siege countries that his country is focused on development and that the Qatar crisis is marginal and there are many regional crisis, Sheikh Mohammed bin Abdulrahman Al-Thani said that the war in Yemen is still ongoing, there is a constitutional crisis in Lebanon, Jerusalem was recognized as the Capital of Israel, the prices are rising and there is no positive indication on development in international indices. On the other hand, he added, Qatar has opened one of the largest ports in the region, has secured food security projects, ensured new international trade lines and hosts international events.