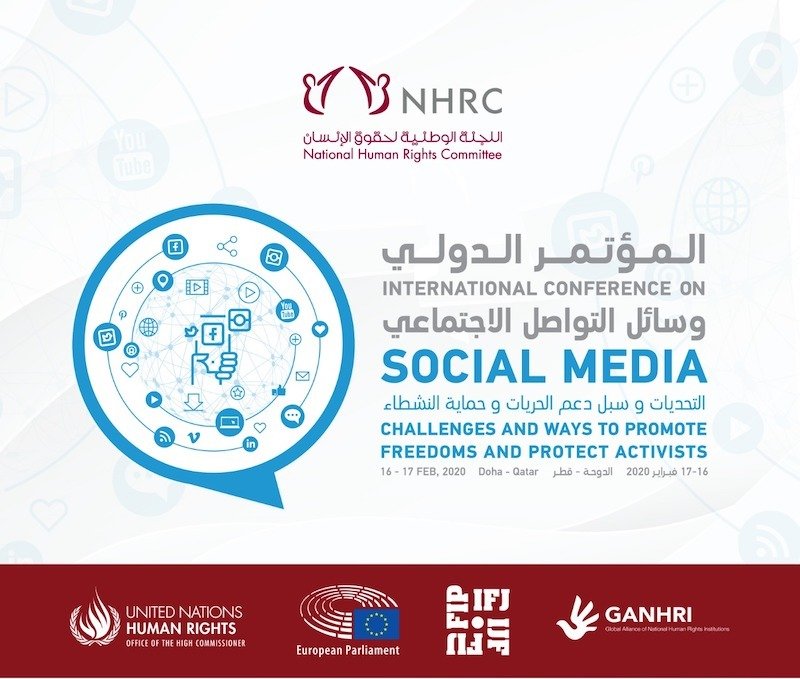 International conference on ‘Social Media: Challenges And Ways To Promote Freedoms and Protect Activists’ will take off  on Sunday.

In a pre-event statement, His Excellency Dr. Ali bin Samikh Al-Marri, Chairman NHRC Qatar said that the preparations for the international conference are in its final steps. He lauded the existing cooperation and coordination between the organizing bodies represented in the National Human Rights Committee, the United Nations High Commissioner for Human Rights at the United Nations, the European Parliament and the International Federation of Journalists.

He said that the conference will witness experts and personalities from human rights institutions, major social media out lets, universities, think tanks, ‘Tic-Tac’, representatives from United Nations, European Union, European Parliament,  as well as wide participation from various regions across the globe including Germany; Italy;  Spain; the United States of America; Unions from Latin American countries such as the Press Syndicate in Costa Rica, Brazil, and Colombia:  as well as unions for journalists from African and Asian countries are participating, he added.

Dr. Al-Marri said that prominent personalities and representatives from the Organization for Security and Cooperation in Europe, Matt international, organizations and networks of social networking sites,  as well as a large participation from Gulf, Arab and African region including Kuwait, Sultanate of Oman, Algeria, Tunisia, Morocco, Mauritania, Jordan, Niger, Senegal, South Africa, Comoros, Cameroon, Uganda besides from Eastern Europe and Russia will be witnessed during conference.

The Conference is scheduled to close by 0230 PM on Monday with the closing remarks by H. E. Ali bin Samikh Al-Marri, Chairman, National Human Rights Committee, Qatar.  A tour visit for the delegates is scheduled at 0600 PM followed by a gala dinner in honour of the delegates at 0800 PM at the National Museum of Qatar.